East Preview: Virginia Tech eager to build on its momentum 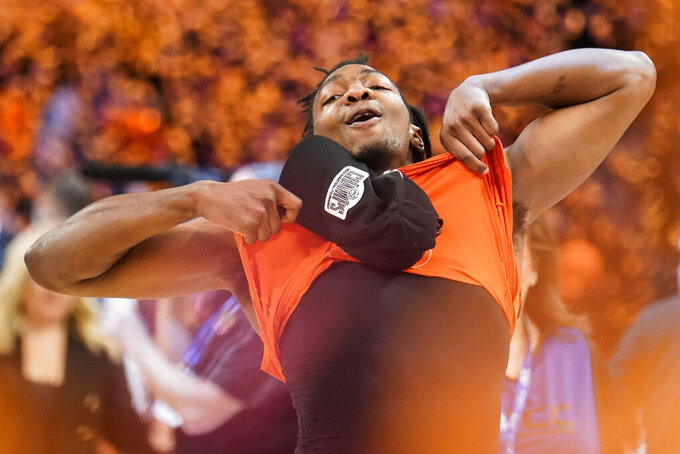 MILWAUKEE (AP) — Virginia Tech has been playing do-or-die games for the last week and believes it can use that experience to make a deep NCAA Tournament run.

“We’re one of the hottest teams in the country, and we do want to continue to play that way,” Virginia Tech guard Storm Murphy said.

Oregon State finished the 2020-21 regular season at 14-12 and had no chance at earning an NCAA bid until it won the Pac-12 Tournament. The Beavers then beat Tennessee, Oklahoma State and Loyola-Chicago as a No. 12 seed before losing 67-61 to Houston in the Midwest Region final.

The NCAA men’s basketball selection committee 1-68 seed list suggests the Hokies wouldn’t have been invited without earning the ACC’s automatic bid. They were one spot ahead of Notre Dame, which got the last at-large spot.

“It’s just a constant battle to prove who we are, what we’re about,” Virginia Tech forward Justyn Mutts said. “We’re all up for the challenge. We’ve got nothing but fighters on our team.”

Virginia Tech nearly went one-and-done in the ACC Tournament, but Lester Maddox hit a season-saving 3-pointer at the buzzer in a 76-75 overtime victory over Clemson. The Hokies followed that up by beating Notre Dame, North Carolina and Duke.

The Hokies essentially had their backs against the wall ever since late January when they were 10-10 with a 2-7 ACC record. Virginia Tech is 13-2 since.

“We kind of dug ourselves a hole,” Mutts said. “It’s crazy to see the disrespect people were putting on us. Nobody believed in us anymore.”

Now the Hokies face a Texas team that’s on a three-game skid, though two of those losses were to NCAA Tournament No. 1 seeds Baylor and Kansas.

PATIENCE PAYS OFF FOR YALE

The wait is finally over for Yale.

Yale won the Ivy League’s regular-season title in 2020 before the NCAA halted the postseason due to the pandemic. The Bulldogs didn’t play at all last season as the Ivy League shut down athletic activities.

The Bulldogs lost two of their top three scorers from that 2019-20 team as Paul Atkinson Jr. transferred to Notre Dame and Jordan Bruner left for Alabama. But plenty of other players stuck around.

“Yale is where I want to be, where I started,” guard Azar Swain said.

“It was a way of staying together,” Yale coach James Jones said. “But we always had an eye on the opportunity to play again, and I will tell you that our first practice in September, I will never forget as long as I’m allowed to live, the smile on (forward) EJ Jarvis’ face when we had our first practice, the excitement that we had getting back on the court and being able to do what we do. It was tremendous.

“Sometimes something has to be taken away from you for you to realize how much you enjoy it to miss it.”

Yale’s players continue to cheer for Atkinson, the 2019-20 Ivy League co-player of the year. They were watching Notre Dame’s 89-87 First Four victory over Rutgers and saw Atkinson score 26 points and make the game-winning putback with 1.7 seconds left in double overtime.

“I was actually in the weight room doing some late-night recovery, rehab work and was watching on the TV,” Yale guard Jalen Gabbidon said. “When it happened, I literally, like, screamed in the hotel.”

Texas and Purdue both lost to double-digit seeds in the first round of last year’s NCAA Tournament. Purdue fell to North Texas in overtime and Texas lost to Abilene Christian.

“It still motivates us to this day,” Williams said.

It’s different for Texas, which has a much different team this year. Beard, who took over as coach after Shaka Smart left for Marquette, overhauled the roster by landing high-profile transfers.

“We can’t dwell on the past,” said Andrew Jones, one of two Texas starters who played in the Abilene Christian game. “We’ve got a new coaching staff, an entirely new team. So we’re just focused on this moment right now.”

Beard expressed surprise when he discovered the carpet in the media room was black. He remembered the NCAA Tournament always having blue carpet and even used it as a motivational ploy.

“I’ve been talking to our guys all year long about the blue carpet,” Beard quipped. “We have a piece of blue carpet in the locker room. I get the guys to dream about the blue carpet. We’ve got some guys who’ve never played in this tournament. We show up here a few minutes ago and it’s black carpet. As a coach, you try to have a little credibility with your team. I’m going to try to explain to the players that I haven’t lost my mind, it’s normally blue carpet.”

The tallest player in Yale’s rotation is 6-foot-8. That creates quite the dilemma as the Bulldogs prepare for Zach Edey, Purdue’s 7-4 center.

“I got a dump truck, and I brought it to practice, and I put it in the middle of the floor, and I tried to get the guys to move the dump truck with it in park,” Jones joked.