Edwards' 38 helps No. 17 Purdue hold off Penn State in OT 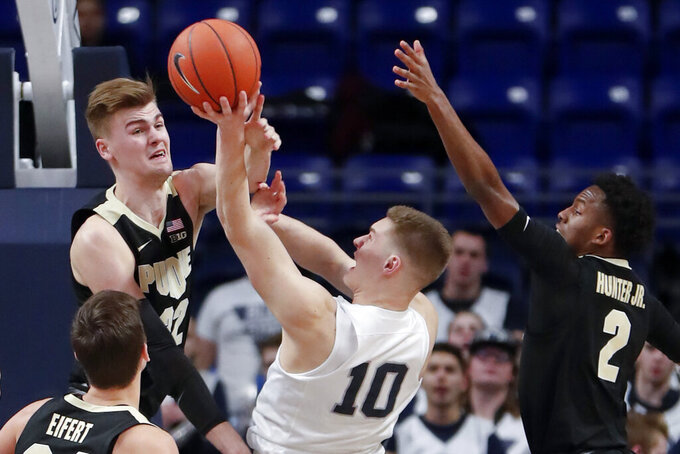 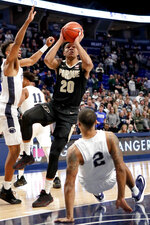 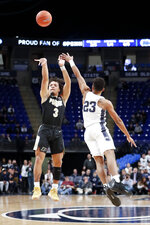 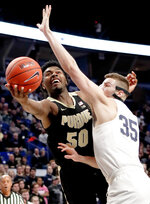 STATE COLLEGE, Pa. (AP) — Matt Painter was surprised to see his best player getting open shots early. He wasn't surprised when Carsen Edwards made one after the other, and then drained the well-defended ones later.

The Big Ten's leading scorer finished with 38 points, including 20 in the first half and a four-point play in overtime, to lead No. 17 Purdue past Penn State 99-90 on Thursday night.

"He's obviously a dynamic player," Painter said. "When he's really feeling it, he's got such range that guys will back up a little bit like he's not going to shoot it."

Penn State coach Patrick Chambers shook his head recounting the deep shots Purdue hit, sometimes with the heels of their sneakers inches away from the edge of the midcourt Nittany Lion logo.

"It almost looked like we didn't game-plan for Edwards," Chambers said. "It's incredible what he does with the basketball."

Purdue led by as many as 17 in the first half and by eight with 5:45 to play in regulation before Stevens and Dread helped lift Penn State. The duo combined to go 9 for 10 from the free-throw line over the next five minutes, and Dread nailed a pair of 3-pointers before Bolton gave Penn State its first lead of the game. His mid-range jumper made it 85-83 with 54 seconds left.

Edwards drove for a tying layup with 5 seconds left to send the game to overtime. Early in the extra period, he was fouled while making his eighth 3-pointer of the game, and he hit the free throw to put Purdue ahead by six.

The Boilermakers scored the first eight points and were 7 for 7 from the foul line in overtime.

Purdue dominated the first 11 minutes thanks to Edwards, who hit five of his six first-half 3-pointers in that span to help spot the Boilermakers a 31-14 lead.

But Penn State got back-to-back 3s from Bolton that sparked its offense. The Nittany Lions put together a 23-10 run over the final 6:31 before Aaron Wheeler made it 50-44 at the buzzer with Purdue's 10th 3-pointer of the half.

Painter isn't thrilled with the way his team is rebounding and knows his team's penchant for sending shooters to the foul line will eventually hurt.

The Boilermakers were outrebounded for a second straight game, with the Nittany Lions pulling down 41 to Purdue's 32. Meanwhile, Penn State made a season-high 30 free throws on 41 attempts.

"I don't think we're hitting enough," Painter said. "When shots go up, you've got to really hit people and then go get the basketball."

Stevens voiced his displeasure for what appeared to be a blown call in the final minute of regulation that would have sent him to the line.

Driving to the basket, Stevens drew contact from Nojel Eastern and immediately looked toward an official. No call came and the Boilermakers took possession.

"I drove the ball right, I got fouled and it was a no-call," Stevens said. "It was a blatant foul. Refs need help."

Purdue: After holding off No. 6 Michigan State in their last outing, the Boilermakers had to fend off another hard-charging team. Their resilience against Big Ten competition should help them in March.

Penn State: Coach Patrick Chambers has said his team is close to breaking out of its funk, and the Nittany Lions looked like it, playing their most inspired game since the eight-game skid began.