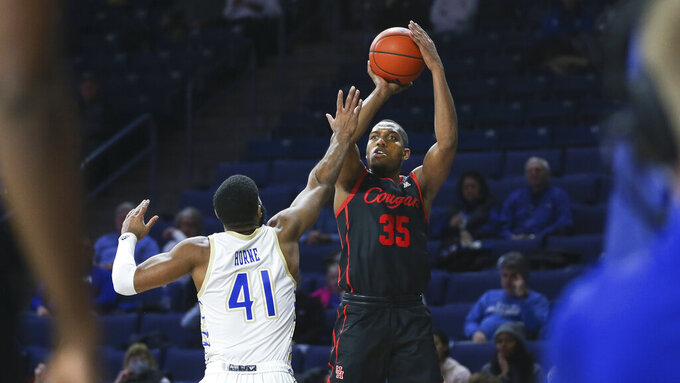 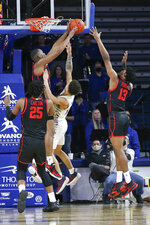 TULSA, Okla. (AP) — Despite a rash of injuries the likes of which coach Kelvin Sampson says he has never experienced, No. 11 Houston keeps finding a way to win.

Tulsa continues to play each opponent tough, only to falter at the end.

The scenario again played out Saturday, as Houston survived two Tulsa rallies to eke out a 66-64 win, thanks mainly to Kyler Edwards’ career-highs in points (29) and 3-pointers (7).

Already without star Marcus Sasser and guard Tramon Mark for the rest of the season, Houston (15-2, 4-0 American Athletic Conference) lost point guard Jamal Shead to an ankle injury in the first half. Edwards, who recently recovered from his own ankle sprain, carried the load, making 10 of 21 shots overall and 7 of 15 3-pointers.

Houston led 64-52 before Tulsa frantically rallied in the final three minutes. A 3-pointer by Jeriah Horne, who led Tulsa with 24 points, followed by a trio of 3-pointers by Sam Griffin in a span of 1:37 brought the Golden Hurricanes within 66-64 with 1:03 to play.

Ramon Walker got a key offensive rebound as Houston ran the clock down to 6 seconds before Tulsa got a final chance to tie. Freshman guard Anthony Pritchard missed a game-tying layup with a second to play, and the team's second chance came with just 0.4 left, but the 3-pointer was blocked.

“Edwards had a great game and that was a tough shot,” Tulsa coach Frank Haith said. “He made a lot of 3s. You’ve got to give him credit.”

Sampson spent most of his postgame comments musing about future lineups with all the team's injuries, but praised Edwards for his toughness and pointed to Tulsa's stick-with-it attitude.

“Give Horne credit,” Sampson said. “He’s a senior that wants to win, Tulsa always plays us tough here and that’s mainly because they have a bunch of tough kids and a coach that won’t let them quit.

“Our kids were on fumes the second half. Every time we come up here, it’s just crazy. Coach Haith and his kids, they fight ... I don’t think I’ve ever seen a year with injuries over an extended period of time like this. But also, we’re 4-0 in the conference and we’ve only played one home conference game. I’m proud of our kids, I’m proud of our program. “

Walker made a wild 3-pointer of his own at the buzzer to conclude the first half. Darrien Jackson jarred the ball loose as Walker started his shot, but he managed to get a grasp and fling it in from 24 feet.

“Without those two plays (the shot and the late offensive rebound), we don’t win the game,” Edwards said.

How clear cut is Houston’s advantage over the rest of the conference? In 21 team statistical categories tracked by the league, the Cougars are No. 1 in 12 and top three in four others. Tulsa leads the conference in free-throw percentage and is top three in two others.

Houston is off to a 4-0 start in the AAC for the first time in Sampson’s eight seasons. The 0-4 conference start is the worst for Tulsa since 2004-05, when it started 0-6 in its final season in the Western Athletic Conference — a year when head coach John Phillips resigned during the season. Tulsa is 1-7 in games decided by five or fewer points.

Tulsa: At Cincinnati on Thursday.