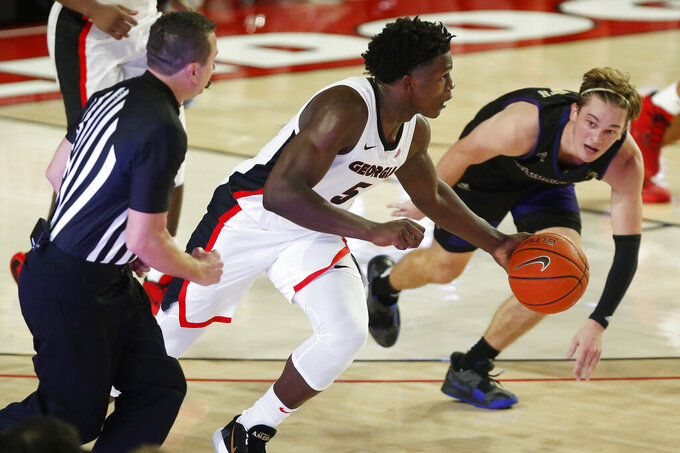 Edwards overcame a slow start to score 24 points in his much-anticipated debut, and Georgia pulled away late to beat Western Carolina 91-72 on Tuesday night in each team's season-opening game.

It was the most points for a Georgia freshman in his debut since Wilkins' 26 points against Troy on Nov. 30, 1979.

Edwards is considered Georgia's most celebrated signee since Wilkins, the longtime Atlanta Hawks standout who was inducted into the Naismith Memorial Basketball Hall of Fame in 2006.

Edwards (6-foot-5), a guard from Atlanta, already is projected as one of the top picks in the next NBA draft.

For now, he's trying to adjust to the college game. He started slow, making only one of his first six shots, but found his 3-point shot in the second half to help the Bulldogs pull away.

"I got my confidence back and just started playing ball," Edwards.

"It warmed my heart and it's something I'll always remember," he said.

Edwards made 7 of 16 shots, including four of seven 3s. He had nine rebounds, four steals and four turnovers.

Mason Faulkner led Western Carolina with 21 points. Carlos Dotson had 17 points and 15 rebounds for the Catamounts before fouling out with 4:25 remaining.

"I think we fought," said Western Carolina coach Mark Prosser. "I think we deserved a better outcome. ... They had very good players that made very good plays, but the final score was not indicative of how the game was played."

Each team hopes to improve on disappointing 2018-19 seasons. Georgia was 11-21 in coach Tom Crean's first season. Western Carolina was 7-25.

Crean said he doesn't think Edwards' slow start was the result of the extra attention rarely given to Georgia freshmen.

"I don't know if it's the pressure of living up to anything," Crean said. "That's not him. But being an 18-year-old ... playing in his first college game, I did see that."

A 3-pointer by Faulkner gave the Catamounts a 49-46 lead before Wheeler made four free throws in a 7-0 run that gave Georgia a 53-49 advantage.

Western Carolina: The Catamounts led 38-37 at halftime while leaning on the inside power of Dotson (6-7, 270 pounds), who was responsible for much of Georgia's foul problems. Onno Steger had 16 points, and the two seniors provided strong floor leadership. Faulkner, a junior, made 5 of 12 3-point shots.

Georgia: Crean's concerns about his team's inexperience proved to be well-founded. Though Edwards was the only freshman starter, five first-year players saw action in the first half. First-game jitters may have contributed to poor shooting, especially in the first half when the Bulldogs made only 12 of 33 shots. Crean said he is encouraged the young players showed no sign of panic when the game was still tight midway through the second half.

The Bulldogs were without senior guard Jordan Harris, who is ineligible until a Dec. 20 home game against SMU. Crean announced in a brief statement released before the game that the cause for Harris' ineligibility "is an internal matter." Crean said after the game Harris is still practicing with the team.

Harris was suspended twice in the 2017-18 season by former coach Mark Fox.

Western Carolina: The Catamounts will play Gardner-Webb in their home opener on Saturday night.

Georgia: The Bulldogs continue their stretch of four straight home games when they play The Citadel, another team from the Southern Conference, on Nov. 12.