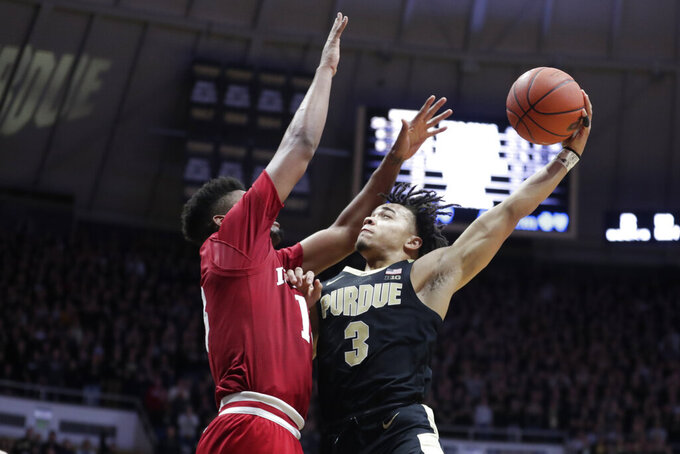 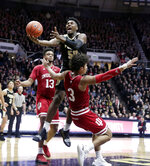 WEST LAFAYETTE, Ind. (AP) — Nojel Eastern delivered at both ends of the court, much to the delight of the Purdue fans at Mackey Arena.

Eastern posted his first career double-double. He also helped limit Langford to just four points on 2-for-10 shooting as Indiana (12-6, 4-3) lost its fourth in a row.

Langford committed three turnovers and missed all four of his free throws, drawing chants of "overrated" from the home crowd.

"We knew going in that he was a great player," Purdue center Matt Haarms said of Langford. "We had a great guy guarding him, the best defensive guard in the Big Ten. ... We just made sure we knew where he was at all times."

Purdue used as 12-2 run at the end of the first half to go up by seven. The Boilermakers then made four of their first six 3-pointers in the second half to build a double-digit lead.

"To start the second half, they got going," Indiana coach Archie Miller said. "When they make 3s, they're a different team."

Edwards struggled from the field, making just 6 of 18 shots, but was able to collapse the defense and create opportunities for his teammates. He added seven assists and four rebounds.

"When he makes those passes it really puts the other team in a bind," Purdue coach Matt Painter said.

Purdue's lead ballooned up to as many 19 points with nine minutes to go thanks to a boost from the reserves. The Boilermakers held a 17-10 advantage in bench scoring in large part due to Haarms second-half play.

Haarms finished with 12 points (eight in the second half), four assists and four rebounds.

For the Hoosiers, Justin Smith had 15 points and Juwan Morgan 14. They were the only Indiana players in double figures, and they struggled to defend a combination of Purdue centers.

Purdue has won five of its last six games as it enters a pivotal part of conference play.

Indiana's skid has coincided with poor shooting by Langford. He'll need to improve for the Hoosiers to climb back in the Big Ten race.

Indiana will most likely fall out of the AP Top 25 poll and Purdue, which received 16 votes last week, could inch closer to re-entering the poll.

Purdue has won seven of its last eight matchups against Indiana, the longest such streak in this rivalry since the Boilermakers won eight of nine games from 1968-1973.

Miller on playing at Mackey Arena: "It was no different than Duke, Michigan or Arkansas. They have a great crowd, obviously, and they feed off it, and it's a great environment. One of the fun ones to compete in, but I don't think noise had anything to do with (our) execution."

Indiana plays at Northwestern on Tuesday.