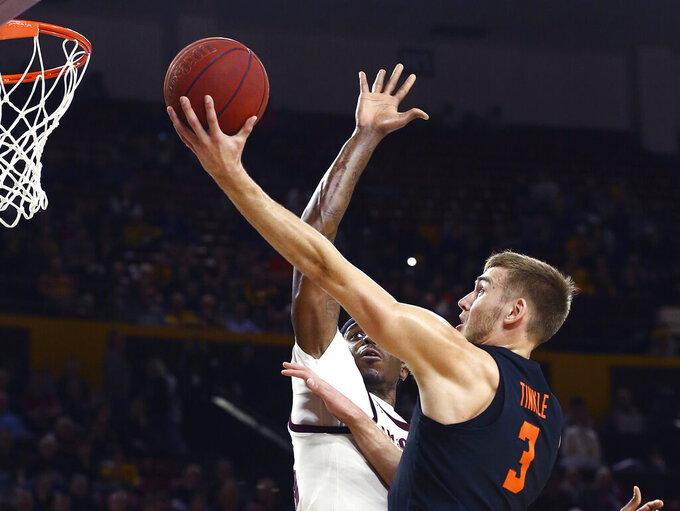 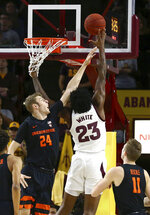 Edwards' 13 points included two clutch free throws with 12.1 seconds to play, and Arizona State held on to hand Oregon State its first Pac-12 loss of the season, 70-67 on Thursday night.

Edwards is statistically the top free throw shooter for Arizona State among regular players at 23 of 26 on the season.

"I've got a lot of confidence in myself when I shoot from long range," Edwards said, "so when I'm at the free throw line, that's close range so I don't think about missing at all."

Zylan Cheatham had 10 points and 13 rebounds, and five Sun Devils scored in double figures to offset a pair of 21-point performances from Oregon State's Tres Tinkle and Ethan Thompson.

Oregon State rallied from an 18-point second-half deficit to trail by one and almost took the lead.

Cheatham slammed home a missed shot for a 68-64 lead, but Tinkle hit from distance again to make it a one-point game with 22 seconds left. Oregon State stole the ball on the inbounds pass after a timeout but turned the ball over a moment later.

With the crowd abuzz from watching the home team's lead evaporate so fast, Edwards hit a pair of free throws — his only two of the night — and Thompson's 3 to tie the game was rushed and well off target at the buzzer.

The Sun Devils turned a nine-point halftime lead into a 40-22 advantage with a fast start to the second half. They scored the first nine points while the Beavers missed their first six attempts.

Oregon State (11-5, 3-1) made it a tight game in the final minutes with a furious comeback, but came up short.

"We were supposed to be the aggressor to start the second half. They were," Oregon State coach Wayne Tinkle said. "But then, we found a group to get some momentum going and made it interesting."

Arizona State opened the game making just one of its first seven shots and trailed 10-4 before going on a 10-0 run.

The Beavers went ice cold, going more than eight minutes without a field goal in the first half. The Sun Devils went ahead 26-15 on a 3 from Edwards at the 4:20 mark.

Thompson had 10 of his points in the first half, reaching double figures for the 10th time in his last 11 games and 11th time this season overall.

Oregon State: The Beavers missed a chance at starting 4-0 in conference play for the first time since the 1992-93 season, but after playing at Arizona this weekend they get five of the next seven games at home. It wasn't a surprise they made it a close game, as Oregon State's previous four losses had come by a combined 16 points.

Arizona State: The Sun Devils had to work to put away what was shaping up to be a blowout win. Now come the Oregon Ducks on Saturday, a team the Sun Devils have struggled with at home in recent years. A win goes a long way in a wide-open Pac-12.

Arizona State guard Remy Martin on the win: "We got lucky. We have so much to learn from the film on where we let it get away. How to attack a 1-3-1 zone when somebody throws it at us, because that eventually slowed us down."

Cheatham soared above the rim for a one-handed rebound midway through the first half, and with the extra possession, Taeshon Cherry sank a high-arching 3 with 10:48 to go for a 17-11 Sun Devils lead.

Cheatham's athleticism was also on display with his two dunks in the final minute.

Arizona State goes for a sweep of the Oregon schools when they host the Ducks Saturday night.