Edwards leads Georgia to surprising win over No. 13 Auburn 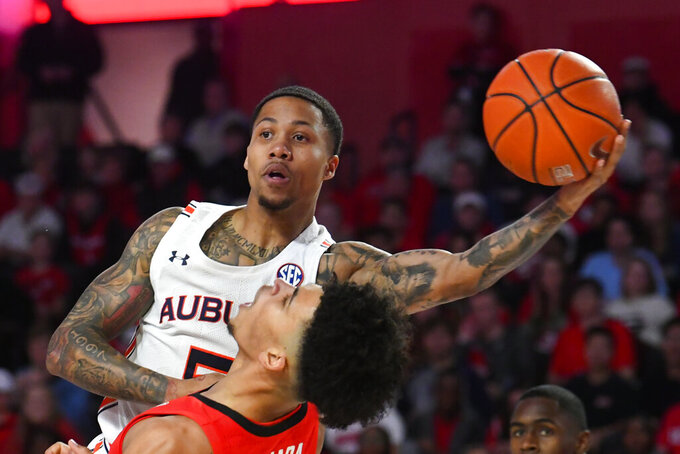 Auburn guard J'Von McCormick looks to pass over the head of Georgia forward Toumani Camara during the first half of an NCAA college basketball game Wednesday, Feb. 19, 2020, in Athens, Ga. (AP Photo/John Amis) 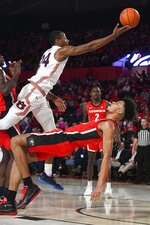 ATHENS, Ga. (AP) — Bruce Pearl looked ahead to the postseason when he attempted to place perspective on No. 13 Auburn's loss to a Georgia team on the doorstep of last place in the SEC.

Georgia coach Tom Crean also looked ahead — to next season and beyond — as he celebrated a win that he hopes gives momentum to his efforts to rebuild the program.

Anthony Edwards scored 18 points, including a late 3-pointer to slow Auburn's comeback attempt, and the Bulldogs beat the Tigers 65-55 on Wednesday night.

The loss damaged Auburn's hopes of catching No. 10 Kentucky, which leads the SEC.

“We had a chance to cut it to five, and a five-point loss on the road looks better than a 10-point loss,” Pearl said.

Auburn's winning streak ended with Saturday's 85-73 loss at Missouri, another team in the bottom half of the SEC standings.

Each loss came without freshman forward Isaac Okoro, who missed his second straight game with a hamstring injury. Another freshman, Allen Flanigan, replaced Okoro in the lineup and scored only three points.

Georgia led 55-50 when Edwards' 3-pointer with 2:15 remaining stretched the advantage to eight points.

J'Von McCormick led Auburn with 22 points. Samir Doughty, who had 15 points, cut Georgia's lead to 58-53 with a three-point play with 1:02 remaining. Toumani Camara sank seven of eight free throws in the final 1:01 to help protect the Bulldogs' lead.

It was a rare highlight for Georgia (13-13, 3-10), which had lost eight of nine, including four straight and leads only Vanderbilt in the SEC.

“The win is awesome, there's no question about it,” Crean said. “The bottom line is that we're building a program. We are going through growing pains and hard days ... but you don't get a program built if you lose momentum with your fans. They are staying with us, and I'm so thankful for that.”

Following the win, Edwards unleashed a yell and ran to celebrate with the student section.

“I told them we can win some games if you stick with us,” said Edwards, who leads the nation's freshmen with his average of 19 points.

With Georgia leading 21-14, Crean gave Edwards and other starters a break with 8:33 remaining, The Tigers immediately launched a 9-0 run — with all the scoring coming from McCormick.

McCormick's scoring spree gave Auburn a 23-22 advantage. The run ended on Anfernee McLemore's turnover on an offensive foul. With Edwards and other starters back on the court, the Bulldogs took advantage of the turnover to start their own 9-0 run, including seven points from Sahvir Wheeler, who had 13 points.

Auburn: McCormick continued to emerge as a go-to scorer. He topped 20 points for the third time in the last four games and only the fifth time this season. He was effective on long-range jumpers, short floaters and drives to the basket.

Georgia: Edwards appeared to have regained some strength after being slowed by flu-like symptoms for the last three games He was held to only six points, matching his season low, in a 74-69 loss at Texas A&M on Saturday. Edwards was active on the boards with six rebounds, but some of his season-high seven turnovers came on unforced errors.

Auburn was left with a three-guard lineup and appeared to miss the scoring of Okoro, who averages 13.1 points and was with the team. Peal said Okoro won't play until he can return to practice. “Obviously, I'm going to handle that with an abundance of caution,” Pearl said. “... We've got to find a way to win without Isaac and win with him when he comes back.”

The attendance was 10,181 for Georgia's seventh sellout. “To have a crowd like that on a night like this shows that we're building the program,” Crean said.