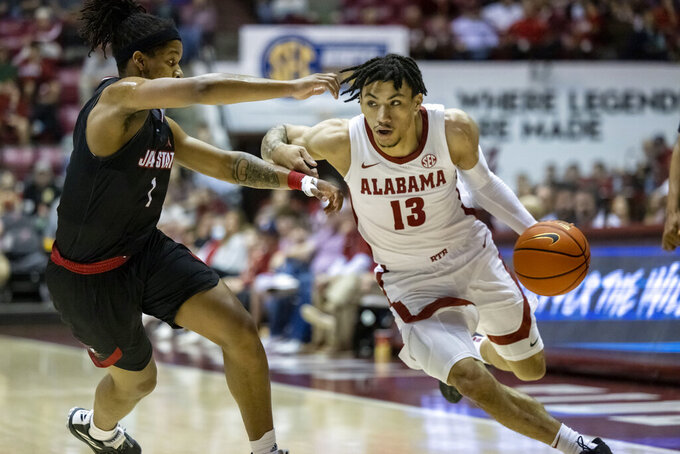 Alabama guard Jahvon Quinerly (13) drives inside against Jacksonville State guard Demaree King (1) during the first half of an NCAA college basketball game, Saturday, Dec. 18, 2021, in Tuscaloosa, Ala. (AP Photo/Vasha Hunt) 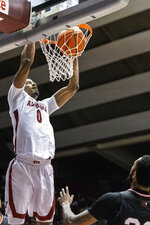 Darius Miles scored 10 points off the bench and made a key block that kept Jacksonville State from pulling within one possession in the final 30 seconds.

“Darius was big for us,” Alabama coach Nate Oats said. “We needed him in a big way to make some shots, he did that for us, gave us energy, seven rebounds. Different guys are stepping up.”

Jacksonville State (5-6) led for a large chunk of the first half, aided by a 15-2 run to take a 20-13 lead. Alabama committed three turnovers in 76 seconds and missed seven of eight shots during that run. Quinerly's 3-pointer at the buzzer kept the Crimson Tide from entering the locker room with a deficit.

Alabama took the lead for good with Miles' 3-pointer near the midway point of the second half and put Jacksonville State away by scoring 15 of the next 17 points.

Alabama’s Jaden Shackelford entered Saturday as the leading scorer in the SEC, averaging 18.2 per game, but he was held scoreless by Jacksonville State. He was 0 for 6 from the field and 0 for 5 from 3-point range. He contributed four rebounds, two assists and a block in 34 minutes.

“I just thought we bottled up the gaps,” Jacksonville State coach Ray Harper said. “We did a good job of making him see two on the drives, we were there on the catch. It wasn’t one guy, it was a team effort what we did defensively.”

It was a continuation of strong 3-point defense from the Gamecocks, which have held seven of 11 opponents under 31% 3-point shooting.

“The shots we were going to give up were the ones out in the corners, the throwbacks,” Harper said. “At times, you have to pick your poison. You can’t get beat at the rim, you just cannot do it, and I thought we did a good job with that.

"We were ready to adjust if they started making a lot of 3s, but I don’t think they ever got in a rhythm where I felt like they were really killing us from the 3-point line, so we stayed with what we were doing.”

Alabama: Hosts 8-2 Davidson in the Birmingham Jefferson Convention Complex on Tuesday. The game was originally scheduled to be against Colorado State, but the Rams cannot make the trip due to COVID-19 cases in the program. Davidson was a late replacement.