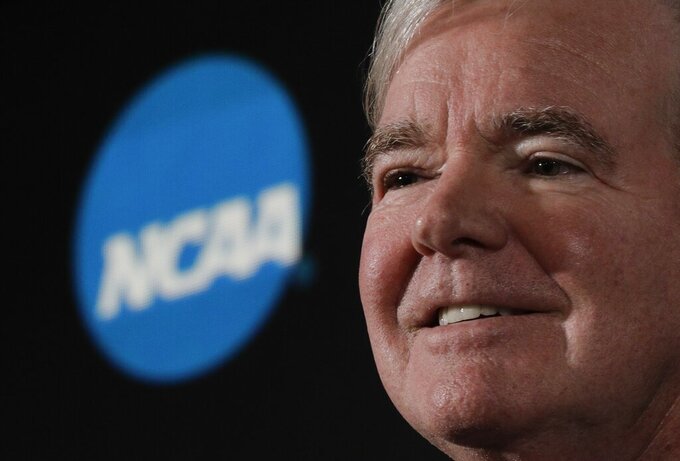 FILE - In this March 29, 2018, file photo, NCAA President Mark Emmert speaks during a news conference in San Antonio. Emmert says a judge’s recent ruling in a federal antitrust lawsuit again reinforced that college athletes should be treated as students not employees. Emmert spoke to The Associated Press on Wednesday, April 3, at U.S. Bank Stadium, the site of the men’s basketball Final Four, making his first public comments since last month’s decision. Judge Claudia Wilken ruled the NCAA did violate antitrust laws and cannot prohibit schools from providing more benefits to athletes as long as they are tethered to education. (AP Photo/David J. Phillip, File)

The association and its members have had to manage the changing landscape of legalized gambling since a Supreme Court decision last year opened the door for states to introduce sports wagering. Seven states have done so since, joining Nevada.

NCAA rules prohibit athletes and coaches from gambling on sports and it is unlikely that will change any time soon.

Emmert held his annual Final Four news conference at U.S. Bank Stadium in Minnesota. He also received questions about the college basketball corruption scandal; the recent ruling in an antitrust lawsuit against the NCAA and sexual assault policy.

As for gambling, the NCAA fought against legalized wagering on sporting events. Now that its cause has been lost, Emmert said the NCAA is working in conjunction with some professional leagues to push for federal guidelines around legalized wagering for states to follow.

"We need to try to make sure that we know that everyone is working off consistent data and information because that becomes a source of a lot of bad behavior when you've got lots and lots of different data sources," Emmert said. "Another thing that we're moving forward on aggressively is we need to have integrity services in place where we can effectively monitor what's going on in all the various sports books so that, when we see inexplicable behavior on a betting line, we know what's going on there, and we can act accordingly."

The NCAA has indefinitely lifted its ban on holding championship events in states where gambling is legal. NCAA legislation would need to be passed to permanently change that rule.

"I don't want to presuppose where they're going to go, but so far I haven't heard any great objections to the position we're in right now," Emmert said.

The FBI's investigation into college basketball has already resulted in the convictions of three men on fraud charges, including two shoe company executives, and guilty pleas by several former college basketball assistant coaches.

Another trial is scheduled in New York later this year.

Emmert said the NCAA is petitioning the court of federal prosecutors to provide finding from hearings and evidence used in trials. While the NCAA can now use information from outside sources to conduct investigations, the courts are not obligated to provide its findings.

"So we petitioned, and we're going to continue to argue aggressively that they should provide that information so we can get to the facts since there's so much interest, not just on our part, but across the country in knowing what really transpired," he said.

— Emmert said that while there have been discussions among NCAA officials about banning athletes from competing if they have sexual assault on their records, coming up with a standardized policy is difficult when laws change from state to state.

"I think it's going to continue to be a debate. I actually hope it continues to be a debate because it's a very important subject," Emmert said. "Individual schools make decisions and distinctions based on those convictions, but right now it's up to individual schools. In some cases, some conferences are looking at it, but I don't expect that discussion to go away."

— On last month's ruling in the so-called Alston federal antitrust case, Emmert told the AP in an interview Wednesday the decision reinforced that college athletes should be treated as students not employees — even though the judge ruled NCAA rules violate antitrust laws. Still, the NCAA is appealing the decision.

"We don't like the notion that we're in violation of antitrust laws," Emmert said.

Emmert added the association does not believe the courts should decide what qualifies as a benefit tethered to education.

"We just find that an unworkable proposal that anytime you want to have a discussion over whether or not something is or isn't tethered education we have to go back to a judge and have that debate and discussion. That just seems inherently inappropriate and not an appropriate role for the judiciary, but one that does fit the role of the NCAA," Emmert said.

On Thursday, Emmert reiterated that position and said he remains committed to ensuring student-athletes are involved in the NCAA's legislative process.