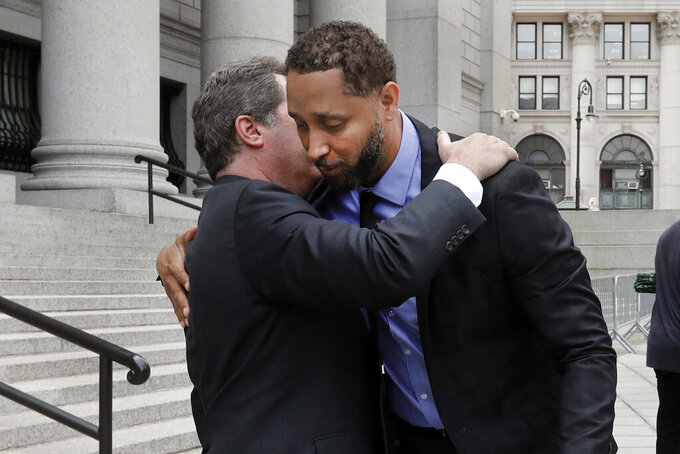 Former assistant basketball coach for the University of Southern California Tony Bland, right, is embraced by his attorney Jeffrey Lichtman as they leave federal court in New York, Wednesday, June 5, 2019. Bland was the first of four ex-coaches charged with crimes to plead guilty to bribery conspiracy. He was sentenced to 100 hours of community service and two years of probation. (AP Photo/Richard Drew)

NEW YORK (AP) — A former assistant basketball coach for the University of Southern California dropped his head in relief Wednesday when a judge announced he won't go to prison for accepting a bribe to steer young athletes to a particular manager.

Tony Bland was sentenced to 100 hours of community service and two years' probation by U.S. District Judge Edgardo Ramos, who said the debate over whether college basketball players should be paid "plays no role in the way I thought about this case."

Students, players and universities were victimized by the bribery scandal revealed when 10 individuals, including the coaches, were arrested in September 2017, the judge said.

Bland, 38, of Los Angeles, was the first of four assistant basketball coaches who pleaded guilty to bribery conspiracy to learn his fate. Ramos will sentence two others later this week.

Bland choked up as he apologized for his crime, including to "the young people I misled." His plea deal recommended up to a year in prison after he pleaded guilty in January, admitting accepting a $4,100 bribe.

Bland, he said, grew up in a turbulent household where police were regularly called and in such extreme poverty that it sometimes required rummaging through garbage cans for food.

"It was a miracle he actually survived it and flourished," Lichtman said.

Now, he said, the scandal has made Bland "radioactive" and unable to find work.

"This is a fall from grace that is almost Shakespearean," Lichtman said.

Bland coached at San Diego State University from 2009 to 2013 before moving to USC, where he was made an associate head coach, second in line to head coach Andy Enfield, in 2014. In college, Bland played basketball for two years at Syracuse University before transferring to San Diego State.

Other ex-coaches awaiting sentencing include Emanuel "Book" Richardson, formerly an assistant at Arizona; Chuck Person, an ex-assistant at Auburn University; and Lamont Evans, who formerly coached at Oklahoma State and South Carolina.

The prosecution unmasked a dirty underworld of college basketball in which financial advisers and business managers, sometimes helped by apparel makers, funneled tens of thousands of dollars to assistant college coaches and athletes' families to steer top players to big-program colleges.

At a recent trial of two of Bland's co-defendants, a government witness described finding several college assistant coaches, beyond those arrested, who were eager to supplement their income with bribes.

Prosecutors said the coaches abused the trust of NBA-bound athletes to connect them with favored managers, financial advisers and even a high-end tailor.

Over two dozen schools have been tainted by the scandal, including Duke, Oregon, Louisville, North Carolina State, Creighton and Texas.