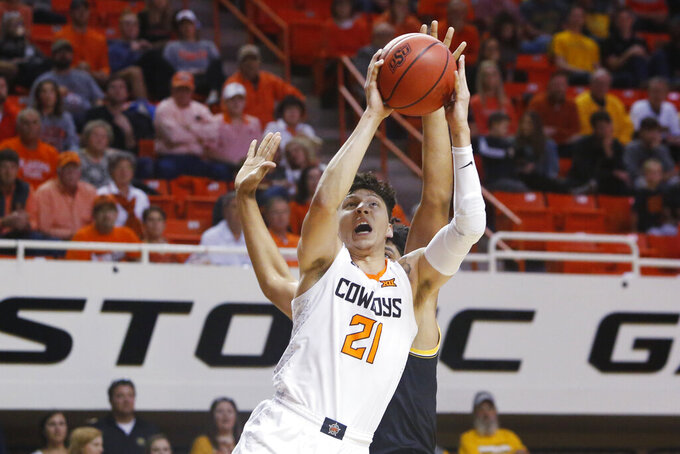 STILLWATER, Okla. (AP) — After getting outrebounded by a 48-31 margin in a 75-63 loss to West Virginia on Nov. 27, Wichita State made that part of the game a point of emphasis and it paid off on Sunday.

“I was just getting out there and my teammates were finding me,” said Etienne, a freshman who had his second-highest point total of the season. “I was just shooting the ball with confidence, not doing anything different, just playing my game.”

The Shockers shot 82.4% from the floor (14 of 17) over the first 12-plus minutes of the second half, extending a 38-31 halftime lead to 29 points, before putting in their reserves down the stretch. Over the course of the second half, Wichita State’s rebounding advantage was 21-13.

“Any time you can go on the road against a program like that, and get a win like that, it’s special,” said Wichita State coach Gregg Marshall. “Our team really performed well. We played a beautiful brand of basketball for the great majority of the game. Congratulations to my guys. We turned the tables on the glass from the West Virginia game, which was a big key for us.”

Lindy Waters scored 11 points to lead Oklahoma State (7-2), one game after he connected for a career-high 30 points in an 81-74 loss to Georgetown. Cam McGriff added 10 points and seven rebounds.

“Credit to Wichita State, they physically manhandled us in a lot of ways, particularly as it relates to rebounding the ball,” said Cowboys coach Mike Boynton. “We didn’t respond and therefore the result. Losses are never easy to take but certainly this one, just the way the game went, is more disappointing than anything.

“I think they pursued the basketball more aggressively than we did. They brought the fight to us, we didn’t necessarily fight back strongly enough. It’s a great lesson. A hard one but a good one.”

The Cowboys have now lost two in a row without starting point guard Isaac Likekele, who averages 13.7 points, 5.3 rebounds, 5.0 assists and 2.9 steals per game, but sat out again due to illness.

For Oklahoma State, which won the NIT Season Tip-off Championship with a dominant 78-37 triumph over Ole Miss on Nov. 29 in Brooklyn, it was a reminder that the young team that went 12-20 last season still has a long way to go.

“A week ago today, people felt like maybe we had arrived, and obviously, that’s not the case,” Boynton said. “We’ve got to get back to the drawing board. There’s a lot of room for growth for this team.”

Wichita State: Picking up right where they left off in their dominating 95-69 victory over Central Arkansas on Thursday night, the Shockers started off strong. Wichita State surged to an early 17-6 lead. After connecting on 7 of 11 shots (63.6%) in those opening five-plus minutes, though, the Shockers shots just 6 of 23 (26.1%) the remainder of the half.

Oklahoma State: The Cowboys entered the day ranking eighth in the nation in 3-point defense (25.4%) and overall field-goal defense (35.8%), but Wichita State significantly exceeded both of those figures. Oklahoma State held the Shockers to 38.2% shooting (13 for 34) in the first half, including 6 for 17 from the arc (35.3%), but in the opening nine minutes of the second half, they allowed Wichita State to connect on 12 of 14 shots (85.7%), including 4-for-4 from 3-point range.

Coming out of halftime, the Shockers simply dominated the first 12:11 of the second half. In addition to their offensive success, they limited Oklahoma State to just 2-of-15 shooting, while outscoring the Cowboys 37-15 over that stretch. “Our guys knew that the game was basically anybody’s game,” Marshall said. “It was a seven-point game and one of two things was going to happen — they could bring it back and tie it or take the lead, or we’re going to push it over 10. I thought our guys really executed, 1-12. They did a very good job.”

Wichita State: The Shockers take on Oklahoma at Intrust Bank Arena in downtown Wichita next Saturday.

Oklahoma State: The Cowboys are off for a week before traveling to Houston to face the 5-2 Cougars next Sunday.