Ewing: Hoyas' full roster available vs. Syracuse as of now 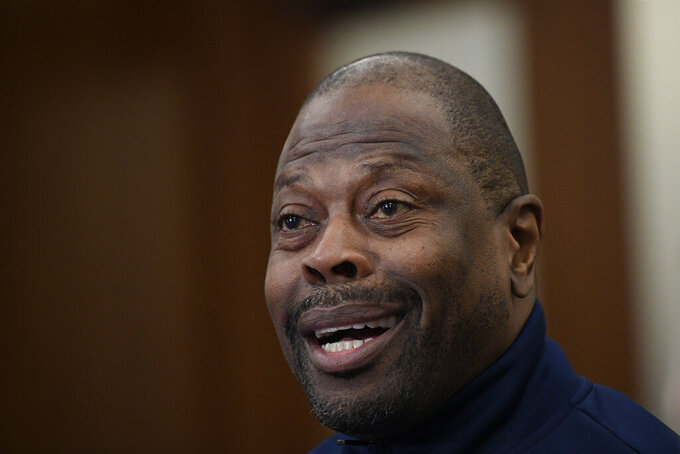 Georgetown head coach Patrick Ewing speaks during an NCAA college basketball media availability, Wednesday, Dec. 11, 2019, in Washington. It was hard not to do a double-take when Georgetown basketball coach Patrick Ewing replied to a question Wednesday about whether his full roster will be available for the team's next game, against Syracuse, by saying, "As of now, yes." That'll be the Hoyas' first home contest since legal matters involving players came to light.(AP Photo/Nick Wass)

WASHINGTON (AP) — It was hard not to do a double-take when Georgetown basketball coach Patrick Ewing answered a question Wednesday about whether his full roster will be available for the team's next game by saying, “As of now, yes.”

Ewing and the Hoyas are in a bit of an “as of now” world at the moment.

Saturday's game against former Big East rival Syracuse will be Georgetown's first at home since legal matters for three players came to light after the school announced last week that one, leading reserve Josh LeBlanc, would be transferring.

Also leaving, for unspecified reasons, was starting point guard James Akinjo, who was not connected to the cases involving LeBlanc and two players remaining on the team, Myron Gardner and Galen Alexander.

“It was kind of like, ‘Wow.’ I kind of felt like I was in a movie,” senior guard Jagan Mosely said about the departures of Akinjo and LeBlanc, who were both among the team's top five scorers. “I come to college, and you expect to go to the Tournament every year. ... And then it's just like, it doesn't turn out that way. And then this happens.”

Washington, D.C., Superior Court records show that LeBlanc, Gardner and Alexander agreed this week — without any admissions — to stay at least 50 feet away from a female Georgetown student, her two roommates and their home and to not contact them. According to court documents, the student accused the three players of “threats against (her) personal safety.”

Asked about possible school discipline for Alexander or Gardner, Ewing replied: “Because of legal issues, there are some certain things I can't even talk about.”

“It's none of, really, my business,” starting guard Mac McClung said. “I wish the best for those guys.”

Akinjo's starting spot has been filled by Terrell Allen, a senior who played one season at Drexel and two at Central Florida before getting to Georgetown.

Allen went from averaging 2.3 points and 1.1 points in 14 minutes over the season's first seven games to 8.5 points and 7.5 assists in 31 minutes in the past two.

“They did do some great things to help our program,” Ewing said of Akinjo and LeBlanc. “They will be missed. Guys are just stepping up.”

This story has been corrected to show that the name of player starting in James Akinjo's place is Terrell Allen, not Terrell Evans.