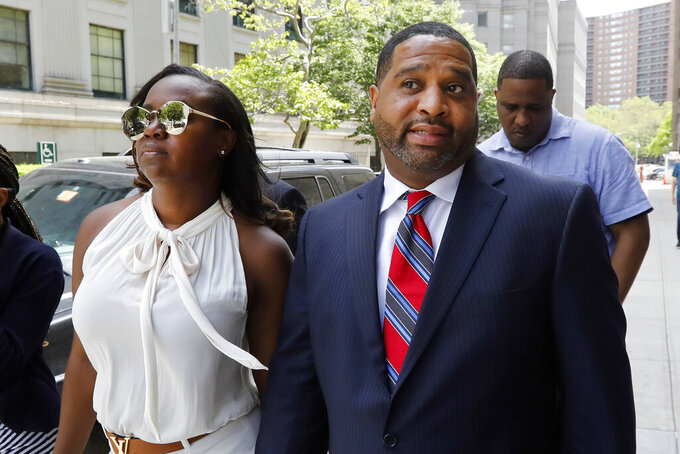 NEW YORK (AP) — A former assistant basketball coach at the University of Arizona was sentenced to three months in prison and two years of probation on Thursday for his role in a college hoops corruption scandal.

Before hearing his sentence in federal court in Manhattan, Emanuel "Book" Richardson apologized to the players he coached at Arizona, saying, "I let them down."

Richardson, 46, had pleaded guilty earlier this year to accepting $20,000 in bribes from Christian Dawkins, an aspiring business manager for pro athletes. He and three other assistant basketball coaches at major programs were charged in 2017 with abusing the trust of NBA-bound players by accepting bribes to steer the players to favored managers and financial advisers.

"Instead of prioritizing his student-athletes' best interests, Richardson sought to profit from them, treating the student-athletes that he coached as assets that he could control for his own benefit," prosecutors said in court papers seeking up to two years in prison for Richardson.

At a trial ending with Dawkins' conviction in May, jurors heard wiretap recordings of Richardson bragging how he could deliver potential clients for Dawkins. In one recording, he even suggested that Arizona head coach Sean Miller was involved in a deal to pay eventual No. 1 NBA draft pick Deandre Ayton $10,000 a month to play for the Wildcats.

Prosecutors haven't accused Miller of any wrongdoing, and he has vehemently denied making any payments.

In a letter to the court in the Richardson case, the general counsel for Arizona wrote that the coach's conduct had done serious damage to the school's reputation and to a basketball program "that had previously enjoyed a stellar record of success, on and off the court."

Because of the bad publicity, "the recruitment effort for future players became substantially more challenging," the letter says. The school "is also facing the prospect of potentially significant sanctions and penalties from the NCAA flowing from the unlawful actions involved in this case," it adds.

On Wednesday, Tony Bland, former assistant basketball coach for the University of Southern California, was sentenced to 100 hours of community service and two years of probation in the same case but no prison time.