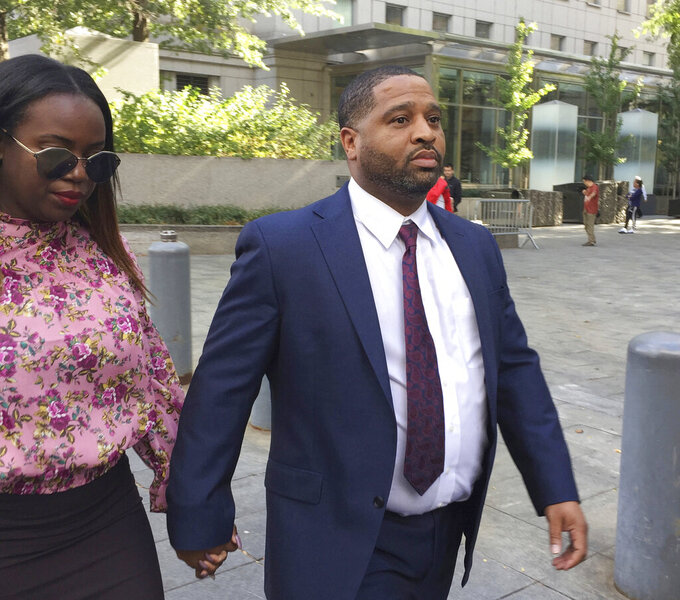 FILE - In this Oct. 10, 2017, file photo, University of Arizona assistant men's basketball coach Emanuel Richardson leaves Manhattan federal court in New York. Richardson, no longer with the team, is expected in federal court, Tuesday, Jan. 22, 2019, for a development in a criminal case in which he is charged with taking bribes from a sports agent. (AP Photo/Larry Neumeister, File)

Richardson, 46, wiped tears from his eyes after telling the judge he accepted $20,000 in 2017 in exchange for a promise to steer student athletes potentially headed to the NBA to an aspiring business manager, Christian Dawkins. Prosecutors said Richardson planned to use $15,000 of the money to entice one prized recruit to attend Arizona.

Richardson said he "knew this conduct was wrong."

"Did you know it was against the law?" Judge Edgardo Ramos asked.

Sentencing was scheduled for April 24.

Richardson, who pleaded guilty to conspiracy to commit bribery, was among 10 college basketball figures arrested in September 2017 in a scandal that exposed a network of personal managers and advisers who paid bribes to coaches and parents of highly touted recruits to steer top athletes to schools.

Dawkins, an Adidas executive and another recruiting insider were convicted in the fall. Earlier this month, former University of Southern California assistant basketball coach Tony Bland pleaded guilty to accepting $4,100 in cash to steer USC players to certain financial advisers and business managers.

A plea agreement signed with prosecutors calls for Richardson to forfeit $20,000. He can also face a fine. The deal includes an agreement that Richardson will not appeal any sentence of two years or less in prison.

Richardson's lawyer, Craig Mordock, said outside court that the plea agreement does not include a cooperation deal.

In a statement, U.S. Attorney Geoffrey S. Berman said Richardson abused his position as a mentor and coach.

"Richardson, entrusted to help players develop as athletes and young men, instead helped himself to the cash offered by unscrupulous agents and financial advisers," Berman said.

Prosecutors said Richardson accepted the bribes with the understanding that he would steer college athletes to use Dawkins' new sports management company.

In one taped conversation described by prosecutors, Richardson was captured telling an undercover FBI agent and others: "I used to let kids talk to three or four guys, but I was like, why would you do that? You know that's like taking a kid to a BMW dealer, a Benz dealer, and a Porsche dealer. They like them all. ... You have to pick for them."