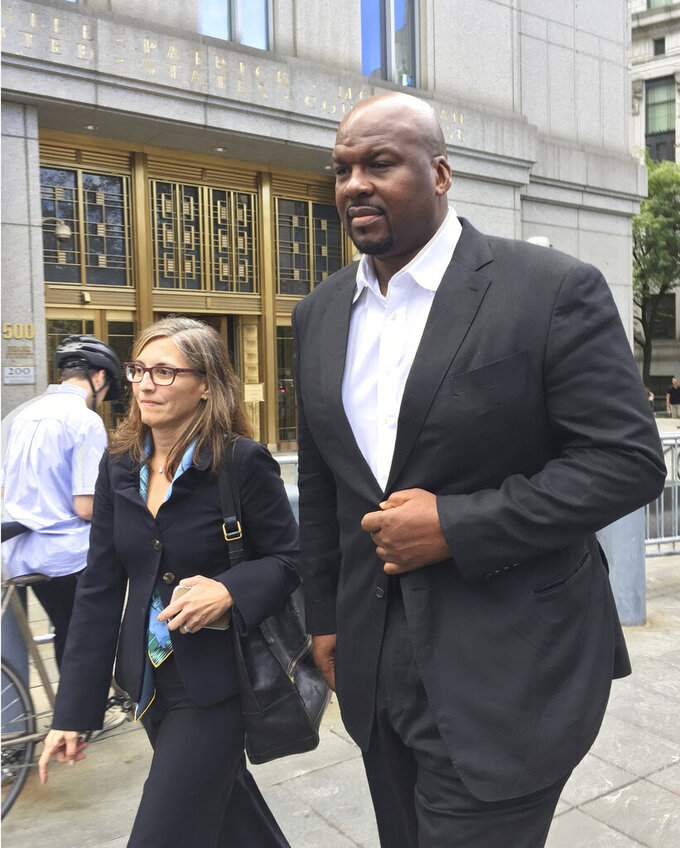 FILE -- In this Oct. 10, 2017 file photo, former Auburn University assistant men's basketball coach, Chuck Person, leaves Manhattan federal court in New York, after an initial appearance before a magistrate judge. Person is scheduled to plead guilty on Tuesday, March 19, 2019 to a conspiracy charge in a scandal that involved bribes paid to families of NBA-bound young athletes to steer them to top schools and favored money managers and agents. (AP Photo/Larry Neumeister, File)

Person, 54, of Auburn, Alabama, entered the plea in Manhattan federal court, averting a June trial. He and his lawyer declined to speak afterward and made a quick exit from the courthouse.

Prosecutors said Person accepted $91,500 in bribes to steer players with NBA potential to a Pittsburgh-based financial adviser. As part of the plea, he agreed to forfeit that amount.

The plea deal has a recommended sentencing guideline range of two to 2½ years in prison, though the sentence will be left up to Judge Loretta A. Preska. The sentencing is scheduled for July 9.

In a release, U.S. Attorney Geoffrey S. Berman said Person "abused his position as a coach and mentor to student-athletes in exchange for personal gain."

"In taking tens of thousands of dollars in cash bribes, Person not only placed personal financial gain above his obligations to his employer and the student-athletes he coached, but he broke the law," he said.

Person's plea falls in line with those recently entered by three other former assistant coaches at major college basketball schools.

Their prison terms are likely to be measured in months rather than years.

In court papers, prosecutors said Person arranged multiple meetings between the financial adviser and Auburn players or their family members.

Prosecutors said he failed to tell families and players that he was being bribed to recommend the financial adviser.

In one recorded conversation, prosecutor said, Person warned an Auburn player to keep his relationship with the financial adviser a secret.

According to prosecutors, Person said: "Don't say nothing to anybody. ... Don't share with your sisters, don't share with any of the teammates, that's very important cause this is a violation ... of rules, but this is how the NBA players get it done, they get early relationships, and they form partnerships."