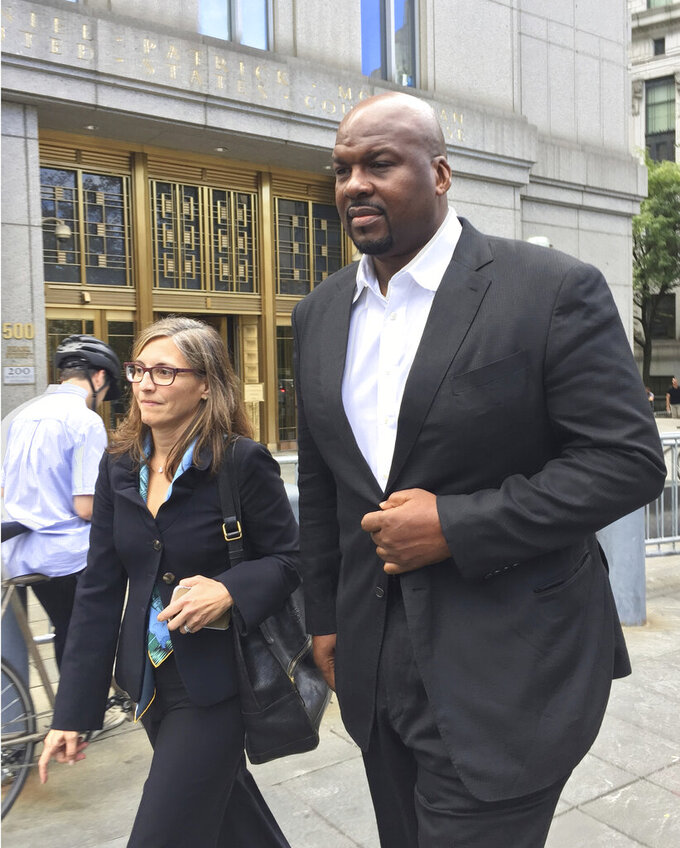 FILE - In this Oct. 10, 2017, file photo, Chuck Person leaves Manhattan federal court in New York. The former Auburn assistant basketball coach is scheduled to plead guilty on Tuesday, March 19, 2019, to a conspiracy charge in a scandal that involved bribes paid to families of NBA-bound young athletes to steer them to top schools and favored money managers and agents. (AP Photo/Larry Neumeister, File)

NEW YORK (AP) — Former Auburn assistant basketball coach Chuck Person is scheduled to plead guilty on Tuesday to a conspiracy charge in a scandal that involved bribes paid to families of NBA-bound young athletes to steer them to top schools and favored money managers and agents.

The change-of-plea hearing was revealed in a filing late Friday by prosecutors in Manhattan federal court.

Person was scheduled to go to trial in June. He will be the fourth and final assistant coach from a major college basketball program charged in the case to change his plea.

His plea deal is expected to be roughly the same as that offered to the other coaches with a recommended sentencing guideline range of two to 2 ½ years in prison.

In the criminal case announced in September 2017, Person was charged with accepting about $91,500 in bribes from a Pittsburgh-based financial adviser to steer clients to him when they reached the NBA. Some payments were alleged to have been arranged by a former NBA referee turned high-end clothier.

Person was quoted by prosecutors as telling one player: "The most important part is that you ... don't say nothing to anybody ... don't share with your sisters, don't share with any of the teammates, that's very important 'cause this is a violation ... of rules. But this is how the NBA players get it done."

The criminal case has left an impression on college basketball, which is at the start of its tournament season known as March Madness.

NCAA President Mark Emmert has said an independent enforcement body to adjudicate major infractions cases could be in place by August.