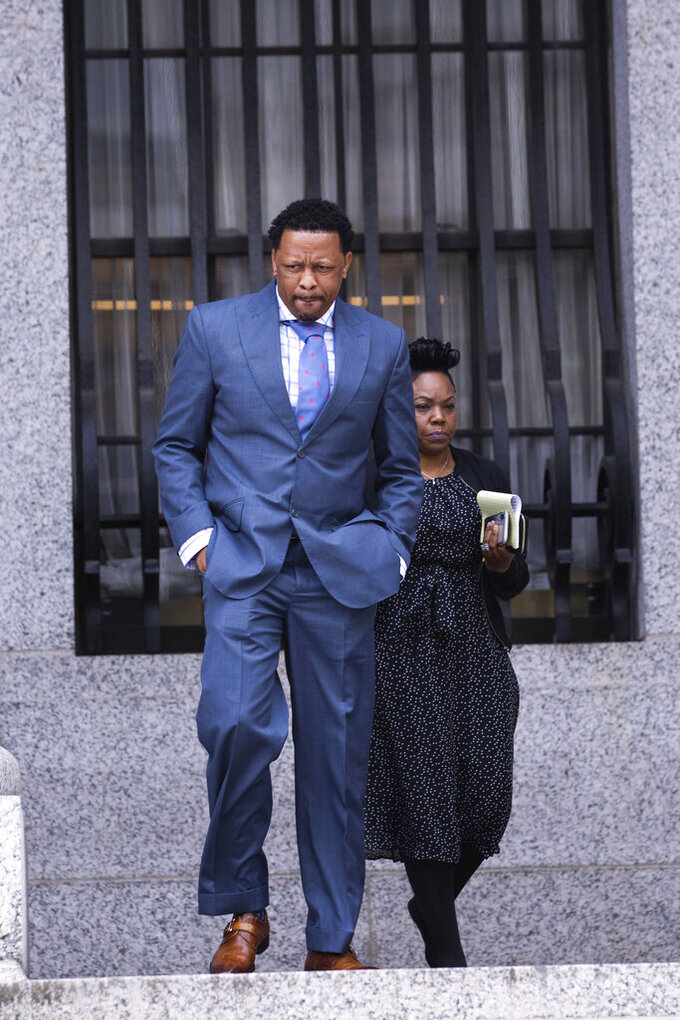 Former Oklahoma State assistant basketball coach Lamont Evans leaves after his sentencing in Federal Court June 7, 2019, in New York. Evans is one of four convicted in a scheme to pay coaches and families of top-tier players to choose favored managers and financial advisors. (AP Photo/Kevin Hagen)

NEW YORK (AP) — A former assistant basketball coach at Oklahoma State and the University of South Carolina was sentenced to three months in prison Friday for accepting bribes to link top players with bribe-paying managers and financial advisers.

U.S. District Judge Edgardo Ramos said actions by Lamont Evans were "perhaps more egregious" than those of two other ex-assistant basketball coaches he sentenced earlier in the week. He also ordered him to forfeit $22,000 and work 100 hours of community service.

Evidence against Evans contained recordings, including one in which he promised that athletes he recruited would sign with managers and financial advisers that he recommended.

"Anybody else that come along. ... I'm going to bury them," he was heard promising on one recorded call that was played at a recent trial of co-defendants.

As Ramos announced the sentence, he referenced letters that friends and family members of Evans had written that recounted the good deeds he had done, particularly on behalf of young people.

"The individuals who wrote those letters would not recognize the Lamont Evans who comes across in the government's videos," the judge said.

"In hindsight and upon reflection, I knew that it was wrong," he said.

As he emerged from the courtroom and encountered several reporters, Evans said: "It's one of the saddest days of my life."

Prosecutors did not win at least 18 months in prison as they had sought.

Assistant U.S. Attorney Robert Boone had argued that Evans was more culpable than others arrested in the probe because he solicited bribes and gifts, including a set of headphones, and traveled across the country several times for meetings to arrange them.

"It wasn't a situation where people paying bribes were coming to his house and throwing money to him," Boone said.

With his September 2017 arrest, Evans lost his $600,000 job and the likelihood he would eventually become a head coach. At the time, he was at Oklahoma State.

His guilty plea in January to bribery conspiracy also could lead to his deportation from the country where he has lived since age 2.

Evans was charged in a case that revealed the role of corrupt coaches in a scheme to steer NBA-bound youngsters to schools or managers.

He was among four coaches who were charged. All pleaded guilty to bribery conspiracy.

On Thursday, Emanuel "Book" Richardson , formerly an assistant basketball coach at the University of Arizona, was sentenced to three months in prison.

On Wednesday, Tony Bland , former assistant basketball coach for the University of Southern California, was sentenced to 100 hours of community service but no prison time.