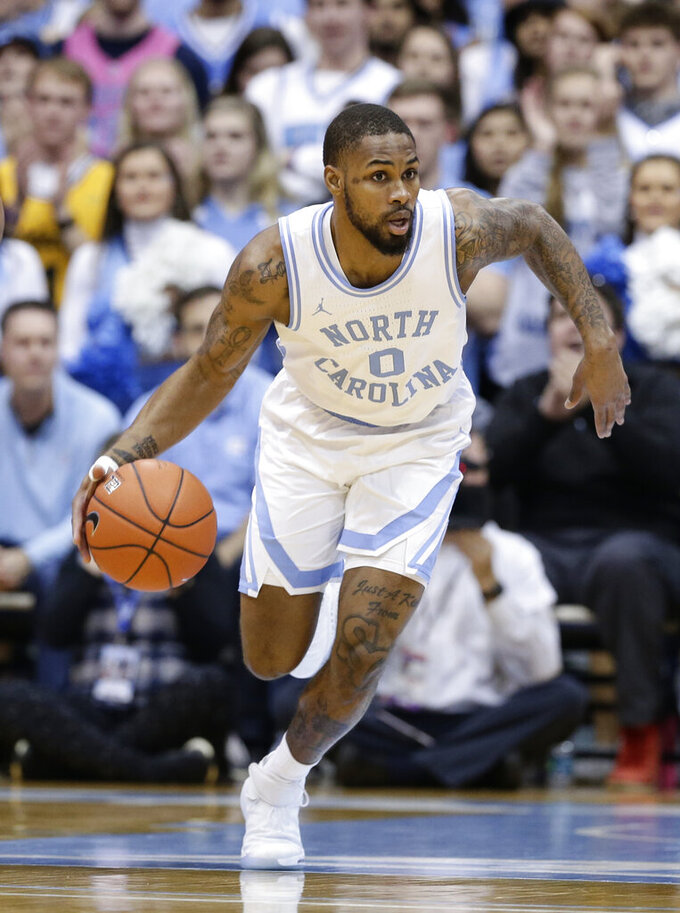 FILE - In this Feb. 11, 2019, file photo, North Carolina's Seventh Woods (0) dribbles against Virginia during the first half of an NCAA college basketball game in Chapel Hill, N.C. Seventh Woods, a highly regarded college prospect from South Carolina, hoped to make a big impact on North Carolina when he left to join the Tar Heels. Woods is back home to finish his college career with the Gamecocks. (AP Photo/Gerry Broome, File)

COLUMBIA, S.C. (AP) — South Carolina guard Seventh Woods can't take a few steps around town these days without someone telling him it is good he came home. The former North Carolina player is happy with his latest choice, too.

"It's been great," Woods said Friday. "Family's here, friends here. I've been getting along well with the players and the coaches."

The 6-foot-2 Woods expected to be a collegiate force when he finished Hammond School in Columbia and picked the Tar Heels over Georgetown and South Carolina in 2016.

Instead, Woods was a backup during his time with the Tar Heels. He was part of North Carolina's NCAA Tournament title team in 2017 but never averaged more than 11 minutes or three points a game during his three seasons in Chapel Hill . Woods missed 17 games with a broken foot during his sophomore season and averaged 2.5 points and 2.1 assists last season as backup to freshman Coby White.

In April, Woods posted on social media that it was time for a change. Woods will sit out next season per NCAA transfer rules and return to the court in 2020-21.

"I can focus on me getting into a groove," Woods said. "Learning a new system and we didn't want to rush anything."

Woods, who turns 21 next month, gained attention during his middle school years for his ability to dunk and dominate opponents off the dribble at Hammond. He was a YouTube, basketball mixtape regular in the early 2010s, when ability like his was largely experienced in person watching youth games.

The buzz about Woods intensified the pressure for him to stay put and revive South Carolina. Woods felt differently.

Woods felt comfortable with the Tar Heels and believed it would be the best place for him to grow as a player and person.

"Only positives, all positive," Woods said of his three years at North Carolina.

When Woods met with Martin to discuss is basketball future, the coach emphasized him taking some time away from games.

"Every time he dribbled, the crowd was sold out and every critic was out there criticizing everything he did wrong," Martin said. "I have no idea how that young man has been able to keep the class he lives with under those circumstances."

Woods looked at Gonzaga and Michigan before picking the Gamecocks this time. The relationship he built with Martin was rekindled the past few months and Woods was grateful to his new coach for this latest chance.

Woods says he'll spend his time improving his strength, consistency and outside shooting. He'll be part of practices and knows that will help him develop chemistry with his future teammates.

His aspirations, as they were during middle school, are to play basketball professionally after college. He's looking forward to a productive time off the court to recharge and improve.

"I feel like sitting out a year will be great for me and I'm going to try and use it to my advantage to make the most out of my senior year," he said.