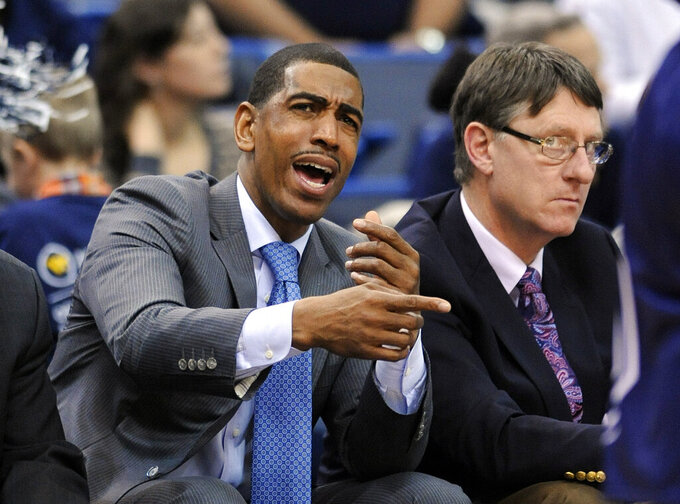 FILE - In this Dec. 6, 2013, file photo, then-Connecticut head coach Kevin Ollie signals to his team as associate head coach Glenn Miller looks on during the first half of Connecticut's 95-68 victory over Maine in an NCAA college basketball game, in Hartford, Conn. Former UConn basketball coach Kevin Ollie has filed a lawsuit against former assistant Glenn Miller, contending Miller slandered him in comments to the NCAA. Miller told the governing body he had learned about an alleged $30,000 payment Ollie made to the mother of a recruit while at UConn. Ollie's lawsuit, filed Monday, April 29, 2019, in Connecticut Superior Court, says that accusation was false and damaged his reputation. (AP Photo/Fred Beckham, File)

HARTFORD, Conn. (AP) — Former UConn basketball coach Kevin Ollie filed a lawsuit against his one-time top assistant, contending Glenn Miller slandered him in comments to the NCAA about an alleged payment to a player's mother.

Miller told the governing body during its recent investigation of UConn that he had learned about the alleged $30,000 payment.

Ollie is joined in the suit by Stephanie Garrett, mother of former UConn player Shonn Miller. Miller played at UConn in 2015-16 after transferring from Cornell. The two Millers are not related.

Glenn Miller's lawyer, Drzislav Coric, derided the suit as an "attempt to intimidate a witness."

The university fired Ollie after a 14-18 season in 2017-18 amid allegations of recruiting violations.

The NCAA notified UConn that it found numerous violations, but the payment mentioned by Miller was not among them.

Ollie's lawsuit, which was dated April 22, but filed Monday in Connecticut Superior Court, says the accusation of the payment was false and damaged his reputation. It allegedly was part of a vendetta against Ollie, who had fired Miller after the 2016-17 season. It seeks unspecified monetary damages.

"Glen Miller stated to at least one other person that coach Ollie would pay and would get what's coming to him," Ollie's attorney, Jacques Parenteau, wrote in the lawsuit.

The lawyer added that Miller also referred to Ollie with an expletive and said: "I was three years away from retiring. He has ruined my life. I don't know what I'm going to do. I can't even get a job on campus. I'm going to get him.'"

Miller's wife, Yvonne, from whom he said he learned of the allegation, also is named as a defendant.

Miller is now an associate director of men's basketball at Division III University of Saint Joseph in Connecticut, where former UConn coach Jim Calhoun is the coach.

Miller's lawyer said his client was obligated to cooperate with the NCAA and provided honest answers. He noted the testimony became public only because of a Freedom of Information request filed by Ollie.

"I think this is just a transparent attempt to intimidate a witness prior to any NCAA hearing," he said.

Coric said Miller plans to file counter-claims against Ollie. The attorney also noted he has subpoena power and plans to use it to get financial and other records, which the NCAA could not obtain from Ollie.

UConn and Ollie are currently in arbitration over more than $10 million, which the coach says he is owed, but the school says was forfeited as part of his contract when he was fired "for cause" because of the NCAA violations.

UConn announced in January it was self-imposing penalties, including the loss of a scholarship for the 2019-20 season. The NCAA has yet to rule on whether it will impose additional penalties.