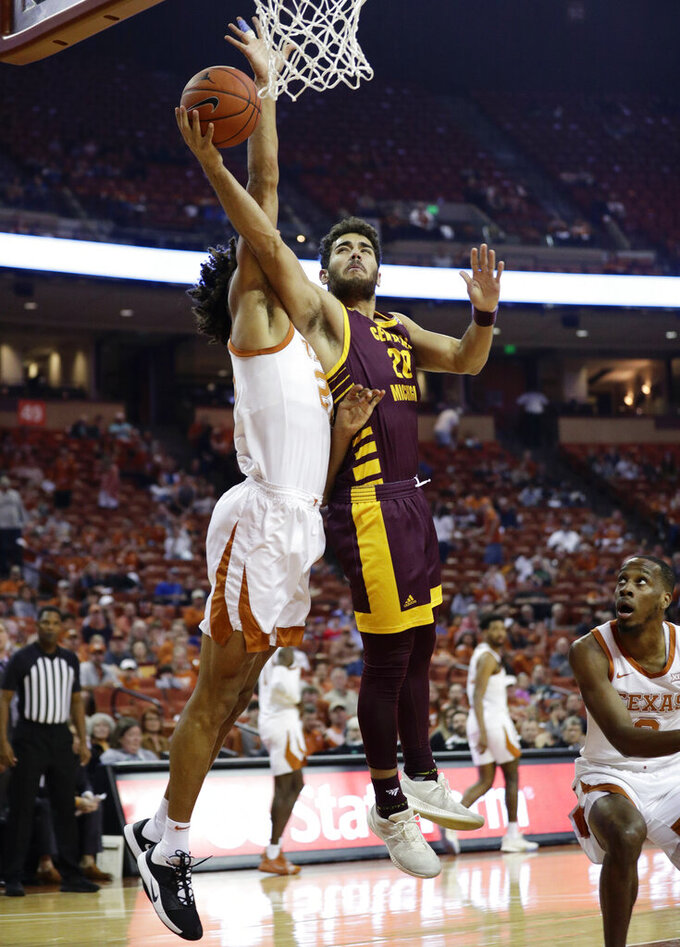 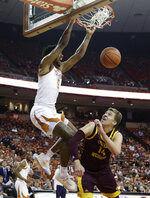 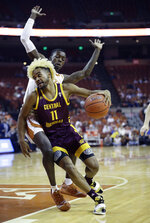 AUSTIN, Texas (AP) — Jase Febres, the most prolific 3-point shooter for Texas, knows that are games when opponents shadow him so closely that he can’t get an open look.

Febres, a junior, established season-bests with 23 points and seven 3-point baskets, and Texas defeated Central Michigan 87-76 after trailing by nine in the first half.

“When I am open I have to take advantage, because I know that in other games they might be face-guarding,” said Febres, who missed only three times from behind the line.

Courtney Ramey added a career-best 20 points for Texas (9-1) and Matt Coleman scored 12. Each handed out six assists. Royce Hamm contributed eight points and a career-best 12 rebounds in 16 minutes as a reserve. The Longhorns went 14 of 25 from 3-point range and shot 51% overall, 58% in the second half.

Central Michigan (7-4) led 42-36 at halftime after inducing 12 Texas turnovers, primarily with frenetic half-court defense. The Chippewas made six steals in the half.

The Chippewas went 6:21 in the second half without a field goal, settling for one free throw, but they never trailed by more than a point during that span.

Then Morgan heated up with three 3-point baskets in less than two minutes. But Febbres matched those with three treys of his own, in a span of 1:37.

Febres’ career-best is eight 3-pointers against Iowa State last season. He made four of them twice this season.

This was another one of those games for Febres, who has shooing 3s with pedestrian 33.8% accuracy before Saturday.

“Guys continue to find me, continues to look for me, and it’s my job to knock down threes and be a spark.”

Sometimes Febres was open in transition because of the fast pace of the game.

“A lot of times in transition, we were pushing and running,” Febres said. “Our jail break mentality.”

“We could have got him even a couple more looks,” Smart said. “This is what Jase is capable of.”

Central Michigan: The Chippewas rely on 3-point baskets to generate offense. They averaged 25.6 attempts and 8.8 baskets a game before Saturday. Texas is one of the best teams in the country at preventing 3-pointers, allowing only 4.7 baskets a game. Central Michigan made nine against Texas, including three in the first three minutes.

Texas: The game against Central was far from the first time coach Shaka Smart’s Longhorns struggled against an early season, mid-major opponent at home. They lost to Texas-Arlington and Kent State during the 2016-17 season, and to Radford and VCU in the span of a week last year. This season they needed two late free throws to escape McNeese State 73-71.

Texas slipped from No. 22 to out of the top 25 after a loss to Georgetown on Nov. 21 in New York City. This week the Longhorns had six points, good for 33rd place. Unless several teams ahead of them lose, the Longhorns might have to establish themselves against Big 12 competition starting in January.

Neither team did a good job hanging on to the ball Saturday. Texas committed a season-high 22 turnovers, six more than in any other game this season, against a team that ranks fourth nationally in turnover margin.

“They do a nice job with aggressiveness,” Smart said. “But the vast majority were on us.”

“I think our guys were trying so hard,” coach Keno Davis said. “I think sometimes when you are trying at that level, you play out of what really has gotten you to that level.”