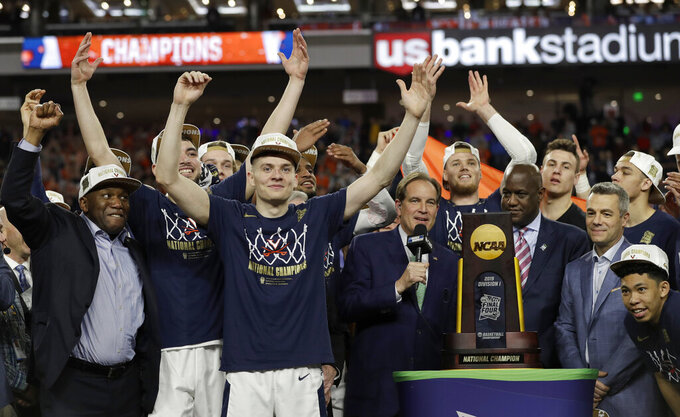 Virginia players celebrate with the championship trophy after defeating Texas Tech 85-77 in the overtime in the championship of the Final Four NCAA college basketball tournament, Monday, April 8, 2019, in Minneapolis. (AP Photo/David J. Phillip)

The Cavaliers won the program's first national championship by beating Texas Tech in overtime on Monday night. That sends the Cavaliers into the offseason and the 2019-20 season as a champion trying to stay on top — much more desirable than its position last year, recovering from the first 16-over-1 upset in NCAA Tournament history.

Here are some of the notable storylines that could impact which team hoists the trophy next season:

The federal investigation into corruption within the sport lingers for the second straight offseason.

Four former assistant coaches charged in the fall of 2017 have entered guilty pleas. That includes former NBA player Chuck Person, who was an assistant for an Auburn team that reached its first Final Four even while another assistant — Ira Bowman — was suspended amid allegations made in a separate case that he was involved in a bribery scheme during his time at Penn.

There was also the March suspension of LSU coach Will Wade for questions about his recruiting tactics, and uncertainty about Sean Miller's future at Arizona.

Reforms adopted last summer allow for the NCAA to accept outside information in the course of rules investigations. NCAA president Mark Emmert said at the Final Four that the NCAA is in contact with federal prosecutors and is seeking "all of the findings that come out of those hearings and the material that's used in those trials."

"We still don't have all the information that we would like to have from those trials," he said.

The NBA and its players have been working toward eliminating the "one-and-done" rule that sets a minimum age for entering the NBA draft at 19, which prevents players from going straight from high school to the NBA. It's unclear when a change might take place.

Virginia will try to become the first repeat champion since Florida in 2006-07 and is poised to be a Final Four contender again, even if De'Andre Hunter bolts for the NBA draft as a redshirt sophomore.

The list of returnees could include Final Four most outstanding player Kyle Guy, Ty Jerome, Mamadi Diakite (who hit the shot to force overtime in an Elite Eight win against Purdue) and Kihei Clark.

"I told our guys in the locker room," Bennett said, "I said: 'Put your arms around each other, take a look at every guy in here, look at each other. Promise me you will remain humble and thankful for this. Don't let this change you.' "

No one expected Texas Tech to play all the way to the season's final night, not after losing most of its rotation from an Elite Eight run in 2018. But coach Chris Beard retooled with a team that became a defensive terror while developing a go-to threat in sophomore Jarrett Culver.

Culver could decide to enter the NBA draft, while graduate transfers Matt Mooney and Tariq Owens will depart to leave big holes. But Beard defied all expectations with a group picked to finish seventh in the Big 12 to become The Associated Press men's coach of the year, and could do it again.

"It's just a great opportunity to learn from and to get even tougher," Beard said of the Virginia loss.

Michigan State overcame significant injury trouble to beat No. 1 overall NCAA Tournament seed Duke and reach Tom Izzo's eighth Final Four. The Spartans could be fully stocked for a strong run in 2020 if a few NBA decisions go their way.

There's All-America and Big Ten player of the year guard Cassius Winston, along with forward Nick Ward, as possible draft entrants, though sophomore forward Xavier Tillman said he would "be back for sure." If they return, there could be plenty of talent along with senior Joshua Langford — who was lost at midseason to injury — and Aaron Henry, who showed promise as a freshman as Langford's replacement as a starter.

Kansas and North Carolina will have significantly different looks.

The Jayhawks are losing Big 12 leading scorer and rebounder Dedric Lawson to the NBA draft, while his brother K.J. Lawson and backup guard Charlie Moore have announced plans to transfer. Kansas could also lose center Udoka Azubuike and guard Quentin Grimes to the NBA draft. Then there's forward Silvio de Sousa, who never played this season and has already been declared ineligible for next season for his guardian accepting a payment from an Adidas consultant uncovered during the federal corruption case.

The Tar Heels are losing their top five scorers with the departures of Luke Maye, Cameron Johnson and Kenny Williams, along with freshmen Coby White and Nassir Little going the one-and-done route.

There were plenty of new names leading prominent programs. The list includes Buzz Williams leaving Virginia Tech for Texas A&M, leading Mike Young to depart from Wofford to take over the Hokies as a Virginia native who grew up only a few miles from Blacksburg. There's the return of Fred Hoiberg to the college level at Nebraska after a stint with the NBA's Chicago Bulls. Other changes include Eric Musselman leaving Nevada for Arkansas and Nate Oats leaving Buffalo for Alabama, and Mick Cronin going from Cincinnati to UCLA.

Among the more interesting moves: former NBA all-star Jerry Stackhouse making his debut as a college coach at Vanderbilt.