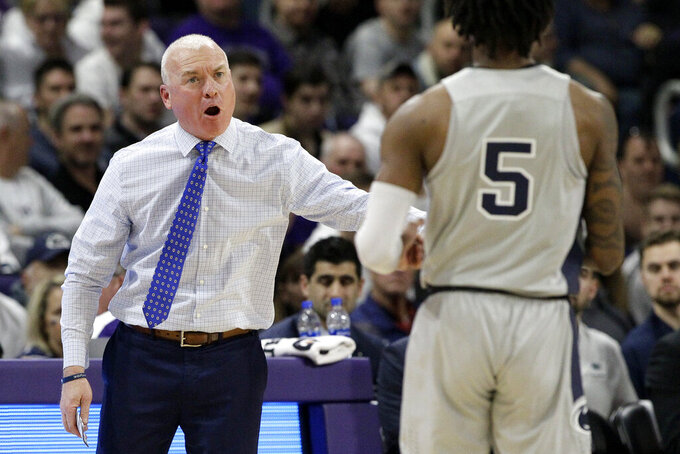 Pat Chambers quickly convinced Florida Gulf Coast that he was the right person to take over its men’s basketball program.

It’s a second chance he vowed to not squander.

FGCU introduced Chambers on Tuesday as its new coach, a move that came about 18 months after he resigned as coach at Penn State following an internal investigation into his conduct — including but not limited to an incident where he referenced a noose when talking to a Black player.

“The last 18 months I’ve been continuing to grow and educate and self-reflect,” Chambers said at a news conference in Fort Myers, Florida. “I’m confident that you, my next team, my players, my future players, you’ll be getting the best leader, best teacher and best coach because I’ve learned a lot from my past. I promise you that. I’m confident in that.”

Chambers is receiving a five-year contract worth about $350,000 annually; final details were still being worked out, the school said.

Chambers was emotional at times at his first public event with FGCU, pausing to collect himself when thanking two of the people who helped get his career back on track — La Salle vice president of athletics Brian Baptiste and Explorers coach Ashley Howard. Chambers was on staff at La Salle as an assistant this season.

“Have to thank La Salle,” Chambers said. “Brian Baptiste, I hope you’re watching. Appreciate you. Ashley Howard, appreciate you. The staff and the players at La Salle, just grateful for you guys. So grateful. You welcomed me with open arms, and I’ll never forget that.”

Chambers went 148-150 in nine seasons at Penn State. He also coached Boston University for two seasons, including an NCAA Tournament appearance in 2011. His career record is 190-178.

FGCU athletic director Ken Kavanagh said he spoke with some of Chambers’ former players — including Lamar Stevens of the Cleveland Cavaliers, who played for Chambers at Penn State — and past employers such as Villanova coach Jay Wright, coming away convinced that he was about to make the right hire.

Chambers worked in a variety of capacities at Villanova, starting as director of operations, then becoming an assistant coach and eventually promoted to associate head coach for the team that went to the Final Four in 2009.

Chambers met with his new team on Monday for the first time. The Eagles play in The Basketball Classic postseason tournament starting Wednesday at home against Detroit Mercy; Michael Fly, who was fired after going 55-59 in four seasons and 21-11 this season, will continue coaching FGCU for the entirety of its stay in that tournament.

“Gratitude, in the last 18 months, it’s a word that just captured my soul,” Chambers said. “It’s captured my heart. I wake up every day, I’m grateful for my wife and my children, my health. ... And I will not take this position for granted, either.”