Final Four drought will end for either Baylor or Arkansas 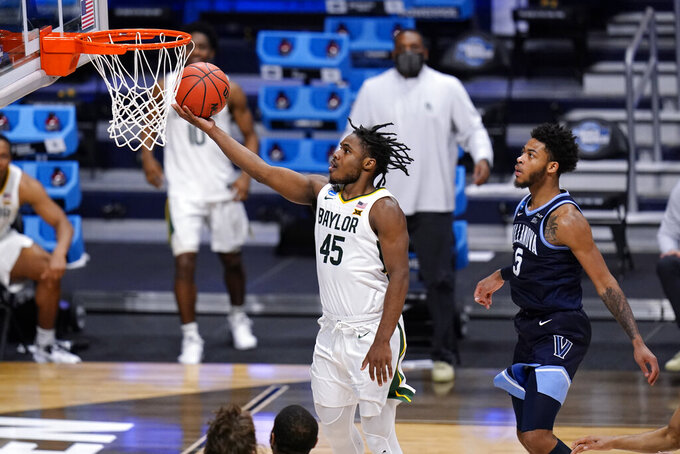 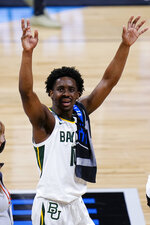 Whether it's Baylor or Arkansas, a proud program will see its long Final Four drought come to an end.

For the third-seeded Razorbacks, the opportunity may be coming a bit quicker than expected in Eric Musselman’s second season in charge.

“It’s an incredible feeling to be in an Elite Eight in just our second year. I really can’t describe it,” Musselman said.

Top-seeded Baylor, meanwhile, has been a solid program for more than a decade under coach Scott Drew. But the Bears have never reached the Final Four in the modern version of the NCAA Tournament.

The Razorbacks (25-6) are seeking their first trip to the national semifinals since 1995, when their bid for consecutive national titles under coach Nolan Richardson was ended by UCLA in the championship game.

That may sound like a long wait, but it's minor in comparison to Baylor's drought.

Baylor’s last visit to the Final Four came in 1950 when the tournament featured eight teams and the Bears beat BYU 56-55 to reach the semifinals, where they fell to Bradley.

“Every team in the country wants to go to a Final Four. We’re on the verge of that,” Drew said. “I think in life, experiences always teach you lessons and different things. And hopefully our staff will be able to prepare our guys and put them in a good position through the two experiences in the Elite Eights before.”

The Bears have only missed one NCAA Tournament that's been played since then. They went 26-4 last season before the tournament was canceled because of the coronavirus pandemic.

“It’s really hard to win and advance in the tournament. And you never take that for granted,” Drew said. “And every time you have an opportunity to do something like this, especially after last year where there was no NCAA Tournament, so many of our guys came back to be a part of this and play in this.”

Baylor will have the advantage in experience in the backcourt. Its three leading scorers — junior guards Jared Butler and Davion Mitchell, and senior MaCio Teague — have played in a combined 304 games. Arkansas’ top three guards — Moses Moody, Jalen Tate and Davonte Davis — have a combined 181 games, the vast majority belonging to Tate.

“Coaches always tell you you’d rather have an older guard than a younger guard, but at the end of the day both of our teams have great guards and if we didn’t, we wouldn’t be still playing,” Drew said.

DON’T CALL IT A COMEBACK

Musselman doesn’t have a ton of experience coaching in the NCAAs, but his teams have a trademark that could trouble the Bears. Even if they Razorbacks get behind, they won’t go away.

In all five of his NCAA Tournament victories with Nevada and Arkansas, Musselman’s teams have fallen behind by double digits. The Razorbacks trailed Oral Roberts by 12 in the Sweet 16 on Saturday, but ended up with their 10th victory this season after trailing by 10 or more.

“We’d all like to get out to a lead, but at the end of the day, there’s going to be runs,” Musselman said. “We’ve been a really, really good second-half team all year, and you’ve got to be able to make adjustments at halftime.”

Baylor has been exceptional during the past two games at protecting the ball, committing 10 turnovers combined.

At the same time, the Bears have forced 54 turnovers during their three games in the NCAAs and are outscoring their opponents 60-12 off turnovers. Arkansas has not committed more than 10 turnovers in any of its three NCAA games.