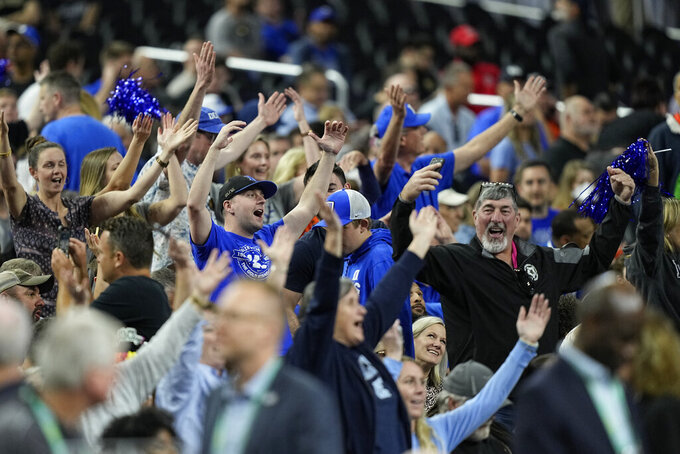 NEW ORLEANS (AP) — Wearing Duke and North Carolina gear, a family with split loyalties lined up outside the Superdome a little after 9 a.m. Friday, nearly an hour before fans were allowed in the stadium for open practices at the Final Four.

The moment they entered the stadium, 14-year-old Brody Owen, wearing a white Tar Heels jersey, ran ahead into the concourse and down the long staircase of the court-level stands to the first few rows behind the bench, where he saved seats for other family members.

Before long, several thousand fans — many wearing gear from all four semifinal teams, and some in business attire who had strolled over from nearby office towers during lunch — filled the vast lower-level stands behind the benches.

The open practices, which were free and held without attendance restrictions, marked the beginning of full fan participation in Final Four activities for the first time since the 2019 NCAA Tournament — the last before the COVID-19 pandemic.

And this year's open practices had an added curiosity factor; it was one of the last chances to see Duke coach Mike Krzyzewski — who'll retire as the NCAA's all-time leader in victories this season — directing the Blue Devils in person.

The practices didn't begin until late morning, starting with Villanova, followed by Kansas, North Carolina and finally Duke. But Duke fans Denise and Steve Simpson, their daughter, Stephanie Owen (a UNC fan), and grandchildren Kylee Hartupee and Brody Owen were happy to sit through two practices before the teams they really came to see took the floor.

“We brought our granddaughter for her high school graduation; she’d never seen Coach K because of COVID,” said Denise Simpson, referring to Hartupee, 17, who was wearing a Duke jersey. “We decided this was as good as it was going to get.”

Steve and Denise Simpson are college basketball junkies from St. Louis who’ve long rooted for Missouri, but transformed into ardent Duke supporters when Chris Carrawell, who is also from St. Louis, played for the Blue Devils in the late 1990s.

But Stephanie, who played youth basketball, loved Michael Jordan. Although she was too young to remember his college career, he was the reason she developed an enduring affinity for the Tar Heels.

Her son followed suit, and Stephanie Owen said they were well aware that the Superdome was also the place where Jordan made a game-winning shot in the 1982 NCAA finals “that changed him from Mike to Michael."

They all came to New Orleans without tickets because they knew that with pandemic restrictions being recently lifted in New Orleans, they'd at least get to see the open practice and check out the Fan Fest in the nearby convention center.

“It’s so fan friendly,” Denise Simpson said. "This is phenomenal. If you can’t get to a game, this is the very next best thing. You get to see them come out and shoot around and just have fun.”

An while they'd been waiting in line, they found tickets for Saturday night's semifinals. They'll be sitting together when Duke and UNC clash for the first time in an NCAA Tournament in the second semifinal game.

“I love them,” Denise Simpson said of Stephanie and Brody Owen, “Even if they have bad taste.”

Villanova guard Caleb Daniels grew up in New Orleans and is getting a lot of attention — and local support — as he tries to lead the Wildcats to a title in the stadium where his family came for Saints games or Bayou Classic festivities such as the “Battle of the Bands.”

For Daniels' parents, Roland and Connie, this is a whole new way to enjoy the hulking, downtown stadium that's been a regular part of their lives.

Now their son will be competing on the elevated court built at the center of 70,000-plus seats ringing the action on three levels.

“He's on stage where he's part of what's going on,” Roland Daniels said after Villanova's open practice in the dome. "To have everybody from New Orleans to support him. It's a huge deal.”

He started his college career at Tulane before transferring.

His parents noted their son is serious now about his goal to keep his body fat close to 5%. So, he hasn’t been eating any of that on this “business trip” home.

“Maybe when he comes back for Easter break, he might treat himself,” Connie Daniels said.

Kentucky coach John Calipari was sitting near the sidelines during the college all-star game after attending the award ceremony for AP Player of the Year and Wildcats rebounding leader Oscar Tshiebwe.

Calipari was there to watch Kentucky guard Davion Mintz, who scored seven points for the West Squad that lost 115-103 in the National Association of Basketball Coaches Reese’s Division I All-Star game, held in the Superdome after the four open practices.

Daniels’ parents were escorted down to the floor for practice and received hugs from Villanova players and coaches.

They said they’ve also been receiving many calls and messages from well-wishers from across the city and especially at Caleb Daniels’ high school, St. Augustine — the same school where NFL and former LSU stars Leonard Fournette and Tyrann Mathieu played football.

They’ve even heard from old acquaintances at Tulane, where Daniels played under former coach Mike Dunleavy Sr. before transferring.

“They’re excited for him,” Connie Daniels said. “The fan base was sorry to lose him, but they were still cheering for him.”

When Daniels was growing up in New Orleans, he liked to eat local staples like red beans and rice, seafood gumbo, fried shrimp po’boys dressed with hot sauce from Parran’s (a French Creole word for ’godfather”), and snowballs, made of fine shaved ice infused with sweet liquid flavors, but softer and smoother than the snow cones found in much of America. He would get the wedding cake flavor with vanilla soft serve ice cream mixed in.

His parents noted, however, that Daniels is very serious now about his goal to keep his body fat close to 5%. So, he hasn’t been eating any of that on this “business trip” to his hometown.

“Maybe when he comes back for Easter break, he might treat himself,” Connie Daniels said.