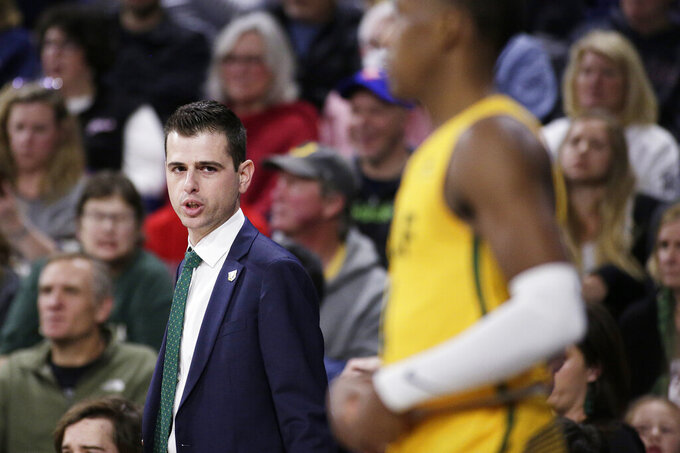 SAN FRANCISCO (AP) — Those who know Todd Golden best are amazed by his even-keel temperament when facing the most pressure packed of circumstances. He's unflappable on the University of San Francisco sideline, unfazed despite being among the youngest head coaches in the country.

Those who know him best also realize Golden has always been ready for this challenge, built for this job.

Still, some pals and colleagues have a little fun and good-naturedly beg Golden to get more spirited, maybe let loose just a little, or perhaps go on an out-of-character rant at the referees for a serious change of pace.

Golden just can't seem to do it — he is already developing a nice rapport with the officials, picking his battles. So it might be a while before he gets a technical considering he hasn't really come close to losing his cool so far, with the Dons (20-11) preparing for their West Coast Conference tournament opener Friday against either LMU or San Diego in Las Vegas. USF is in fifth place in the league, trailing Pacific and three probable NCAA Tournament teams Gonzaga, BYU and Saint Mary's.

“I’ve tried a couple times this year, but no dice,” Golden joked.

Golden is doing things his way on the Hilltop since being promoted in late March last year to replace Kyle Smith, who departed USF to take over the Washington State program.

New athletic director Joan McDermott had no issues taking a chance on the “untested” Golden, though she has heard about it from critics. She had seen and heard plenty of great things about his leadership and ability to run a program while facing the hurdles that come at a mid-major college.

“What I didn't know was how he would handle the pressure and be able to maintain his composure during a game,” McDermott said. “He has shown that he can do this and has even gone up against some of the seasoned coaches in the league and held his own. I think this is really the story about Todd. I have been in awe of how he has handled himself.”

Sure, Golden gets razzed on occasion around campus as the sporty, fun — not to mention young — new guy in charge.

His unique approach has impressed his peers, quickly catching the eye of colleagues not only around the West Coast Conference but also the country.

“He’s doing a great job. He’s a great young mind,” Gonzaga coach Mark Few said. “He does some real creative things offensively and defensively. I like how he’s building the roster. He’s going to be a good one.”

Veteran USF baseball coach Nino Giarratano pulled Golden aside with an encouraging word for the first-year men’s basketball coach and his next-door neighbor after the Dons stunned BYU 83-82 on Jan. 25.

There was some friendly teasing, too.

Golden starred at Saint Mary's in the East Bay suburbs under Randy Bennett and then-assistant Smith, reaching two NCAA Tournaments with the Gaels — and Smith, of course, was thrilled with McDermott's choice of his top assistant.

“By hiring Todd, I felt very grateful that Joan and the administration believed in what we were doing. Todd not only knows how to teach the system, he also played five years at Saint Mary’s and lived the experience,” said Smith, who trusted Golden with great responsibility for the program. “He is a self-made coach.”

A former professional player for two years with Maccabi Haifa of Israel's top division, Golden also served a year under Smith at Columbia before two seasons at Auburn.

McDermott saw in Golden a proven recruiter with a keen eye for talent who knew the game inside and out and also developed a close-knit culture through strong relationships with his players.

Less than a month into her job as USF AD, McDermott named Golden head coach without even opening a national search. The first significant hire of her tenure drew scrutiny from some boosters. But many fans understand the decision now that they've seen Golden at work, and his coaching will be on display for a larger audience later this week.

“It meant the world to me that Joan was fully confident in me being able to carry the torch for this program,” Golden said. “She knows how important it is to me for our program to continue the progress both on the court and in the classroom that we’ve made over the past three years.”

Golden is making a point to think outside the box when it comes to schemes such as out-of-bounds plays or late-game situations for a program that competes for attention in the sports-heavy Bay Area. The Golden State Warriors now share space in the city, not to mention the San Francisco Giants, two NFL teams nearby and a pair of Pac-12 programs in California and Stanford.

Golden so appreciates the thoughtful words of support from someone as decorated as Few leading the perennial WCC power Zags in Spokane, Washington.

“First of all it’s a huge compliment coming from Coach Few because he’s one of the best coaches in the country and he’s done an incredible job building his program up,” Golden said. “I just take it as a compliment. I don’t know exactly what it means. The one thing I know he appreciates about me and our program is that we compete hard. I think he felt that when I was playing and he would give me credit for that back then.”