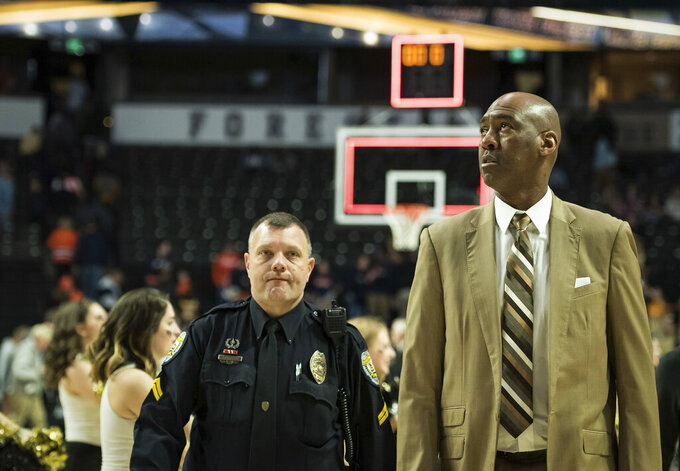 The basketball season ends well before Currie formally starts his new job on May 1, so retiring AD Ron Wellman says he will make any major decisions "if there are major decisions to be made" — with both men saying Monday that they'll keep an open line of communication during the transition.

Wellman and Currie spoke a day after the school announced the retirement of the longest-tenured AD in Division I and its selection of Currie, a Wake Forest alumnus and Wellman protege who ran the departments at Kansas State and Tennessee, as his successor.

The moves come with one of the school's highest-profile programs at a crossroads, and the official transition date falls several weeks after the Demon Deacons' season wraps up.

"I'll be the one making those decisions, but there will be communication between John and me, for sure," Wellman said.

Currie says he has confidence in whatever Wellman, who took over at Wake Forest in 1992, decides to do.

"Ron Wellman has made a career of incredible decisions for Wake Forest" and at his other schools, Currie said. "I have extraordinary trust and respect for Ron and President (Nathan) Hatch, and as we go along the road, I'm sure that I'll be clued in when I need to be."

The situation in men's basketball certainly will need to be addressed — one way or another.

Coach Danny Manning is 65-90 overall and 24-64 in Atlantic Coast Conference play with one NCAA Tournament appearance in five seasons. Barring a miracle run in the postseason, the Demon Deacons (11-17, 4-12) are headed for their seventh losing season since 2010 — also the last year they finished above .500 in the league.

Nearly half of Manning's losses here (44) have come by double figures. Of the 17 losses this season, nine have been by at least 20 points. That includes the worst loss in the three-decade history of Joel Coliseum — a 95-57 setback to North Carolina last month — but doesn't include head-scratching home defeats by Houston Baptist and Gardner-Webb that, at least, were close. And the Demon Deacons still have to play No. 4 Duke and No. 14 Florida State later this week.

Manning has said part of the problem is youth, with only one scholarship player — junior Brandon Childress — remaining from the 2017 team that reached the NCAA Tournament's First Four.

Complicating matters, Manning received a contract extension before last season, but Wellman did not disclose the terms or the length of the deal, as is customary at the private school.

And the lack of recent success in that sport threatens to undercut the success the department is enjoying in other areas.

Dave Clawson's football program has won three bowls in three years, the men's tennis team won an NCAA title in 2018 — one of five team national titles Wake Forest has claimed since Wellman took over — and the school ranks No. 6 nationally and tops in the ACC in the standings for the Director's Cup, given to the top overall athletic department.

Plus, several new facilities are sprinkled across campus, from the football program's indoor practice facility that opened in 2016 to the sports performance center and new basketball practice building scheduled to open later this year.

But basketball has long been the signature sport in the ACC, and there's no denying Wake Forest has lagged behind over much of the past decade.

"It needs to be resolved," Wellman said. "We need to do better, and I am confident that we will."