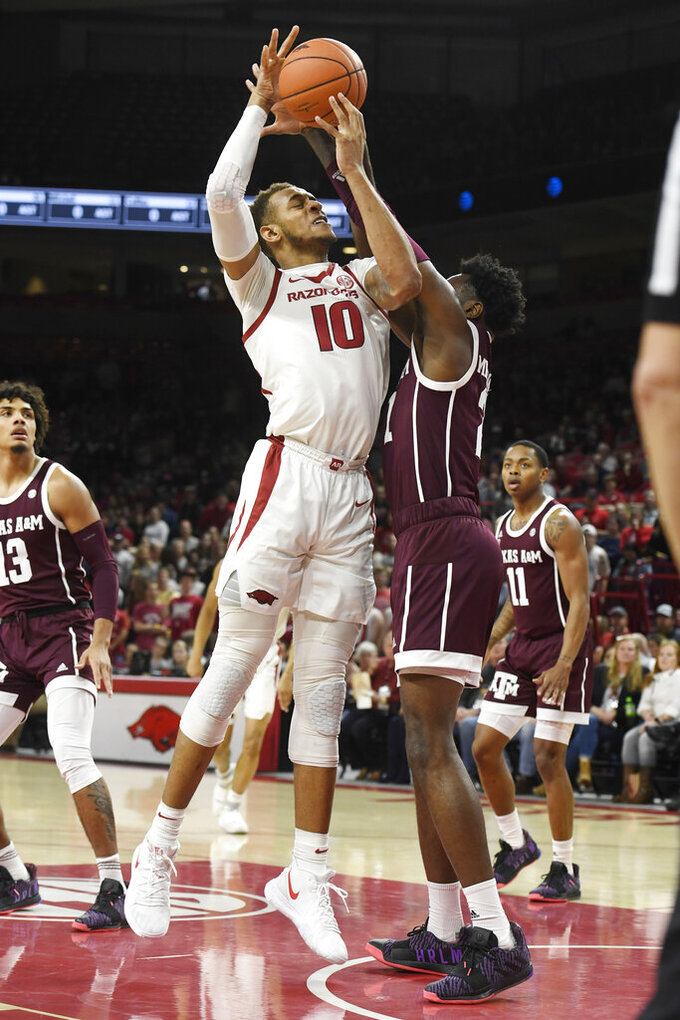 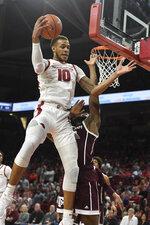 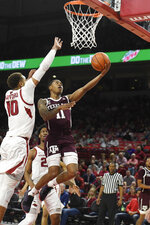 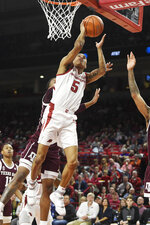 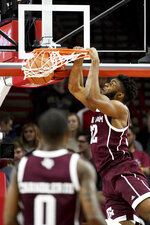 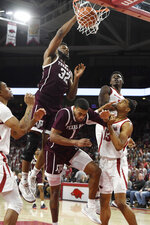 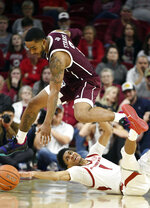 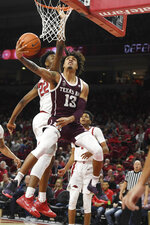 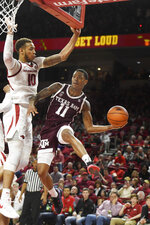 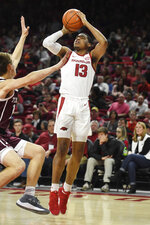 FAYETTEVILLE, Ark. (AP) — With 30 seconds left, Texas A&M forward Savion Flagg stepped to the free-throw line knowing the game was probably out of reach, even if Arkansas fouled and moved the ball like it still had a chance.

For good measure, he hit both, pushing his Aggies' lead back to nine on their way to an 87-80 road victory over Arkansas on Saturday night.

Joe came into the game leading the SEC with 91 3s at an impressive 42.3-percent clip, so Kennedy's plan was to limit his shots.

Arkansas pulled within two points with 8:21 remaining in the second half, but Flagg drilled a fastbreak 3-pointer and spurred an 11-2 run that essentially put the game out of reach.

That run included three consecutive layups from TJ Starks, whose acrobatic ability to find the basket through bigger defenders allowed him to finish over and around Arkansas' players. By the time Jones scored a layup at the 2:13 mark, the Aggies' lead was 75-64.

"I'm just proud of our guys because it wasn't a pretty game, but I thought we figured out a way to win," Kennedy said. "We made enough plays in that stretch to pull away in that second half, and that was critical."

Flagg, who came into the game as the team's third-leading scorer averaging 12.2 points, scored 13 in the second half as the Aggies survived strong second-half performances from Gafford and Jones.

"I thought we did a good job handling their press. We got some easy baskets in transition," Kennedy said. "That's kind of how we've played all year, trying to get paint touches and spread out for 3s. We were able to get some easy baskets, and once you make 3s, it opens up the lane."

Despite the Razorbacks' best efforts to get the ball to Gafford within the final two minutes, the Hogs weren't able to catch up.

Josh Nebo had 14 points and Starks finished with 11 for the Aggies, who outrebounded Arkansas 35-25.

Texas A&M: The Aggies have won consecutive games and four of their last five going back to a road win at Missouri on Feb. 9. The positive run has been a respite for a team that suffered two, three-game conference losing streaks. While it would take a strong run in the SEC tournament to earn an NCAA Tournament berth, the Aggies are playing perhaps their best during this late-season push.

Arkansas: At five straight losses, the Razorbacks are in a completely different spot than they were after a win over Vanderbilt on Jan. 5. At that point, they seemed to be in position to make the NCAA Tournament. The Razorbacks have lost six games at home, an uncharacteristic stat for Arkansas coach Mike Anderson.

The athletic department honored former Razorback guard U.S. Reed with a special presentation at halftime. Reed, who played at Arkansas from 1977-81, is best known for hitting a half-court, game-winning shot against Louisville during the 1981 NCAA Tournament. During the event, a cheerleader who had retrieved the game ball donated it to the university.

Texas A&M: Continue its two-game road trip at No. 13 LSU on Tuesday.

Arkansas: Travels to Lexington to play No. 4 Kentucky on Tuesday.