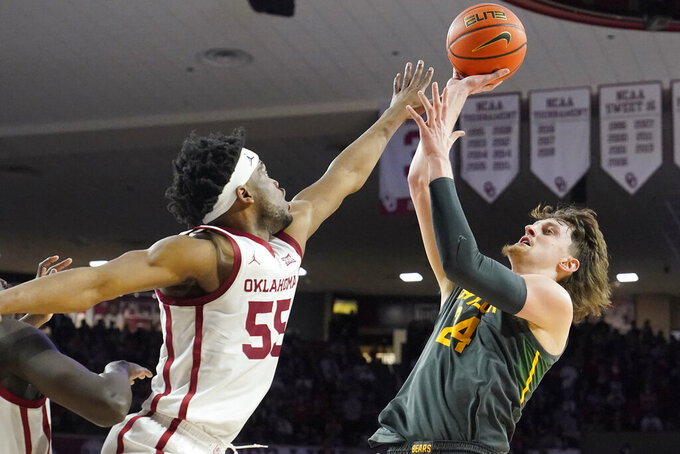 LJ Cryer added 14 points and Matthew Mayer had 12 for the Bears (17-2, 5-2 Big 12). The defending national champions bounced back to win both games this week after losing at home to Texas Tech and Oklahoma State the previous week.

“We like this week a lot better than last week," Baylor coach Scott Drew said. "That’s first and foremost.”

Baylor shot 61% in the second half to sweep the regular-season series with Oklahoma. The Bears now have 14 straight wins away from home.

Umoja Gibson scored 13 points and Elijah Harkless added 12 for the Sooners (12-7, 2-5), who committed 25 turnovers. Oklahoma lost its fourth straight after a promising start that saw the Sooners nearly crack the AP Top 25.

The Sooners have had issues with turnovers lately, and coach Porter Moser is struggling to figure out how to handle it.

Oklahoma didn’t score for more than five minutes to start the game as Baylor ran out to a 10-0 early lead.

Baylor closed the half strong and led 25-21 at the break. Oklahoma committed 14 turnovers in the first half to undercut its solid 47% shooting from the field.

Oklahoma was cold to start the second half too, and Baylor took advantage with an 8-0 run to go up 33-21.

Tanner Groves hit a 3-pointer, then Harkless made two free throws with just over seven minutes remaining to trim Baylor's lead to three.

Baylor's James Akinjo fell hard on his back after making a layup with 6:37 to play. He left the game and did not return. The Big 12 assists leader missed Tuesday’s win at West Virginia with a lower back injury.

“Purposely, I was trying not to put him in those situations and then we needed a bucket," Drew said. "Unfortunately, he hit that tailbone again, so we’ll keep rehabbing him. And it’s it’s a bruise, so it’s all pain tolerance. It’s really painful, but he’s a tough kid, too.”

Groves was called for a technical with 6:09 remaining after Mayer hit him in the face with his knee and Groves let the officials know he disagreed with their no-call. There also was a personal foul on Oklahoma, and Baylor's Cryer made all four free throws to put the Bears up 51-42 and give them control of the game for good.

Moser called the technical unacceptable and told Groves to let him handle the situation next time.

“Officials have a little bit longer rope with a with a coach than a player, so he knows it," Moser said. "He just apologized to the team. You can’t do that. Remember, you can’t scream at the official, no matter what it is. And that was those are those are key moments when you’re coming back and it turned out to be a four-point possession.”

Baylor: The Bears appear to have righted the ship after the losses the previous week. In the previous meeting with Oklahoma, the Bears committed 26 turnovers and barely won. This time, Baylor collected 16 steals and scored 35 points off Oklahoma's turnovers.

Oklahoma: The Sooners shot relatively well but could not keep the ball. At times, their turnovers exceeded their field-goal attempts. They rebounded better than in the first meeting with the Bears, but their giveaways made up for it.

Oklahoma has a first-year coach and several transfers. Drew said that made preparing for the Sooners difficult the first time around, when the Bears beat them 84-74 on Jan. 4.

Every Baylor starter had at least two steals. Akinjo and Mayer had four, Flo Thamba had three and Flagler and Kendall Brown had two each.

Oklahoma: At West Virginia on Wednesday.