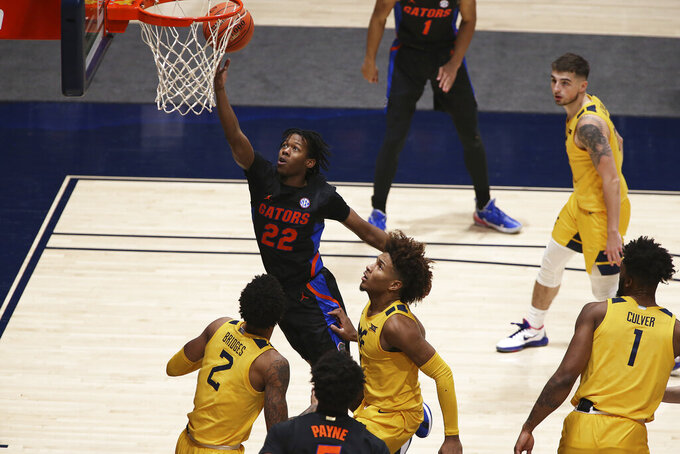 Noah Locke had 19 points for Florida (10-4), which has won a season-high four straight. Tyree Applebee finished with 12.

The Gators went ahead to stay on Scottie Lewis' tiebreaking 3-pointer with 4:05 remaining. Castleton followed with a three-point play, and he made two free throws to put the Gators up 83-80 with 1:36 remaining.

Castleton was called for an offensive foul with 59 seconds left, but West Virginia committed a shot-clock violation on the ensuing possession.

Appleby made two free throws with 28 seconds left for the final margin.

Derek Culver led West Virginia (11-5) with a career-high 28 points, but he was bottled up in the second half. He scored seven points after the break.

Sean McNeil added 21 points and Taz Sherman scored 11 for the Mountaineers. Leading scorer Miles McBride, who had 24 points in an 88-87 win over No. 11 Texas Tech on Monday night, was held to nine.

Florida: The Gators shot 25 of 30 (83%) from the free-throw line. The real difference was in transition, where Florida outscored West Virginia 26-5 in fast-break points.

West Virginia: The Mountaineers faded down the stretch and now turn to their most grueling stretch of the season with eight games in three weeks, including five on the road. Six of those matchups are against ranked opponents.

Despite beating No. 10 Texas Tech last Monday, Saturday's loss could prevent West Virginia from moving into the top 10 of the AP poll.