Florida forward Stone out for season with torn knee ligament 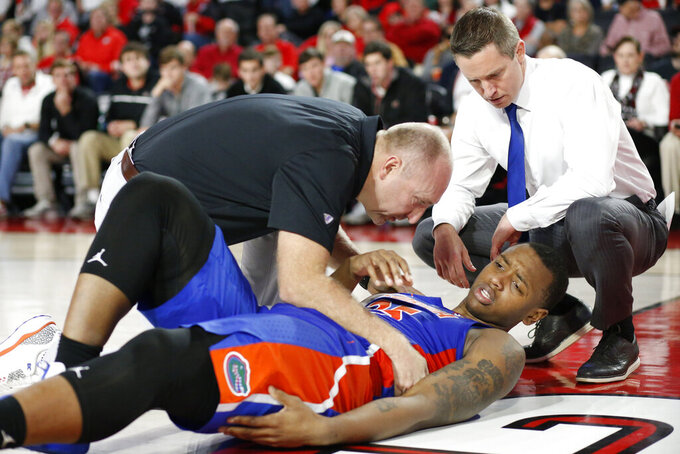 Florida forward Keith Stone (25) is checked on by a trainer and Florida coach Mike White after going down with a leg injury during an NCAA college basketball game against Georgia in Athens, Ga., on Saturday, Jan. 19, 2019. (Joshua L. Jones/Athens Banner-Herald via AP)

GAINESVILE, Fla. (AP) — Florida forward Keith Stone will have season-ending surgery after tearing the anterior cruciate ligament in his left knee at Georgia.

The Gators announced the news Sunday, one day after their 62-52 victory in Athens and after Stone underwent further testing.

The 6-foot-8 junior from Deerfield Beach averaged 6.1 points and 3.9 rebounds in 17 games this season, including 13 starts. He scored eight points in nine minutes before landing awkwardly on his left leg while trying to block a shot against the Bulldogs.

Coach Mike White says "we're really disappointed for Keith. You could see he was playing with confidence (Saturday), and you hate to see a guy go down at any time."