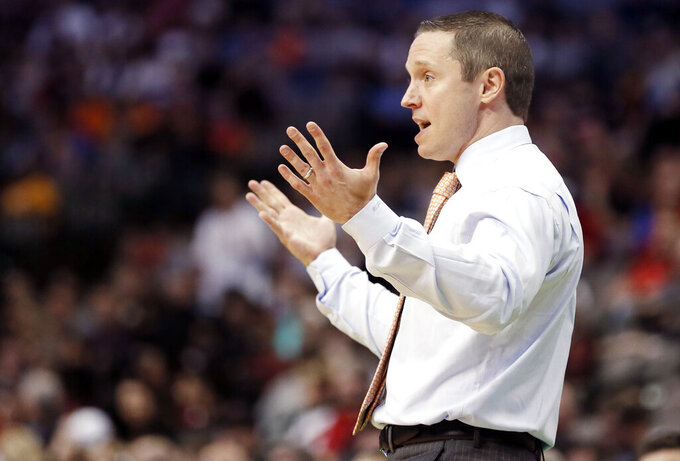 FILE - In this March 15, 2018, file photo, Florida head coach Mike White gestures during the first half of a first-round game against St. Bonaventure at the NCAA college basketball tournament in Dallas. Florida coach Mike White says he has a team of "clock-watchers," guys seemingly content to coast through the final minutes of games and hope to win. It's the only way he can explain how the Gators have struggled down the stretch in Southeastern Conference play. (AP Photo/Brandon Wade, File)

GAINESVILLE, Fla. (AP) — Florida coach Mike White said he has a team of "clock-watchers," guys seemingly content to coast through the final minutes of games and hope to win.

It's the only way he can explain how the Gators have struggled down the stretch in Southeastern Conference play.

Florida (9-7, 1-3) has done little right in the closing minutes of league play, leading to the program's worst conference start since 1996.

The Gators were outscored 10-2 in the final 2:51 of a 71-68 loss at No. 24 Mississippi State earlier this week and watched third-ranked Tennessee close with a 9-0 run in a 78-67 setback last weekend. Throw in blowing a 14-point, second-half lead to South Carolina and squandering most of a 16-point lead at Arkansas, and White's team appears to lack mental toughness, intestinal fortitude and the ability to put anyone away.

"When it's winning time, you can't freeze up offensively and defensively," White said Friday. "We have to do what got us there and do it even better."

Florida's late-game failures have varied with each outing, but there have been enough similarities that White had his staff crunch the crunch-time numbers. Turnovers, defensive lapses, poor shot selection, missed 3-pointers, botched layups, all of them showed up repeatedly in the final four minutes of the last four games.

White said opponents have shot 50 percent from 3-point range while the Gators have made 1 of 10 from behind the arc. He added that his team is 2-for-7 shooting layups and dunks.

"Not very good," he said. "We had some miscommunication issues. We've had some uncharacteristic stuff happen, both offensively and defensively, that just hasn't happened (early) in those games."

Part of the problem has to do with Florida relying on three freshmen, guards Andrew Nembhard and Noah Locke and forward Keyontae Johnson. They are naturally going to have some growing pains.

But White pointed to the play of his upperclassmen as being the bigger culprit. Jalen Hudson is 8-of-38 shooting (21 percent) in SEC play, including 3-of-19 from 3-point range. Fellow senior KeVaughn Allen has been the team's leading scorer in each of the last three games, but he has been ineffective late. Allen almost single-handily cost Florida against Tennessee, promoting White to put him on the bench in the final minutes.

Junior Keith Stone was there, too, and has been for most of the last four games.

The real head-scratcher for White is who to get the ball to in tight games.

"We just have to play to win and not play not to lose in the clutch and make big plays when they matter," Nembhard said.

The one positive is White believes his team is close to being really good. The Gators had chances to win each SEC game, and six of their seven losses were one-possession games in the waning seconds.

"We can all lose our minds and just talk about how unbelievably negative of an experience this is for all of us," White said. "But on the other hand, you can say, 'Guys, we could easily be sitting here as a top-10 team in the country if we would execute down the stretch, have a little bit more swagger to us, make plays when they need to be made because we've been really close to beating some of the best teams in the country.

"I mean, we're close. We're very close. I hope that that's what our guys are thinking. That's what we're preaching to our guys, but you never know. If we play discouraged and woe is me and why does this keep happening to us, it will keep happening to us; I can guarantee you that. We've got to dig ourselves out of the hole that we're in. No one's going to do it for us."