Florida hopes to get handle on turnovers as postseason nears 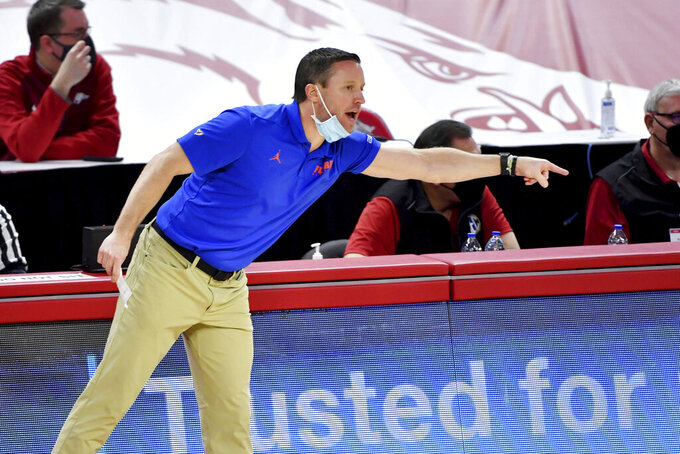 Florida coach Mike White instructs his team as they play Arkansas during the second half of an NCAA college basketball game in Fayetteville, Ark. Tuesday, Feb. 16, 2021. (AP Photo/Michael Woods)

The Gators are on pace to finish with the program’s worst assist-to-turnover ratio in more than two decades, an unintended consequence of playing fast and trying to create easy baskets in transition.

Coach Mike White warned everyone within earshot, especially his players, about the perils of pace heading into the season. A former college point guard, White knew that speeding up the offense could create errant passes, charges and maybe even a few awkward alley-oops. Throw in three program pauses this season, including two because of COVID-19 positives and protocols, and it’s been even tougher for White’s guys to find their footing while trying to go full speed.

“It starts with our point guards,” White said. “We have turnover issues on this team. We do. Our guards have to improve. We’re playing faster than we have in the previous couple of years and with that comes a responsibility to make good decisions or we’ve got to slow it down a little bit.”

The Gators (12-6, 8-5 Southeastern Conference) have a combined 27 assists and 50 turnovers in their past three games — and still managed to win two of them. Still, White sees his backcourt’s loose ways as problem No. 1 as the postseason nears.

Florida plays at Kentucky (8-13, 7-7) on Saturday, another chance to reverse what’s become a season-long trend. The Gators have played just four games this season in which they finished with more assists than turnovers.

They rank 12th in the SEC — ahead of only the Wildcats and Texas A&M — and 260th in the nation in assist-to-turnover ratio. With 221 assists and 259 turnovers, Florida would need a remarkable turnaround down the stretch to avoid a negative ratio for the second straight season.

Last year’s team ended the pandemic-shortened season with barely more turnovers (369) than assists (368). It was the program’s first negative turnover ratio since 1998-99, when then-coach Billy Donovan was in his third season and had Eddie Shannon running the point.

The Gators have played faster without him, raising their adjusted tempo ranking from 326th in the country to 135th, according to Pomeroy’s advanced analysis ratings. But picking up the pace has led to more turnovers while Mann, Lewis and Appleby each average nearly 30 minutes a game.

“A bunch of our turnovers in the past five or six games have been somewhat late-game and have been, in my opinion, potentially a direct result of guys playing heavy minutes and playing winded and making poor decisions,” White said. “We’ve just got to make more sound decisions when we’ve got the basketball. It’s such a big factor and we’re willing to try different things.”

That includes slowing down. But the Gators don’t think it will come to that.

“It’s just wanting to take care of the ball and cutting back on the plays where you’re trying to thread the needle,” Mann said. “Just getting rid of all that stuff and making the simple play. There’s a lot of times where you could save yourself from turning the ball over where you make like a crazy pass or something like that which you thought was open.

“Just the thought of not turning it over helps a lot.”