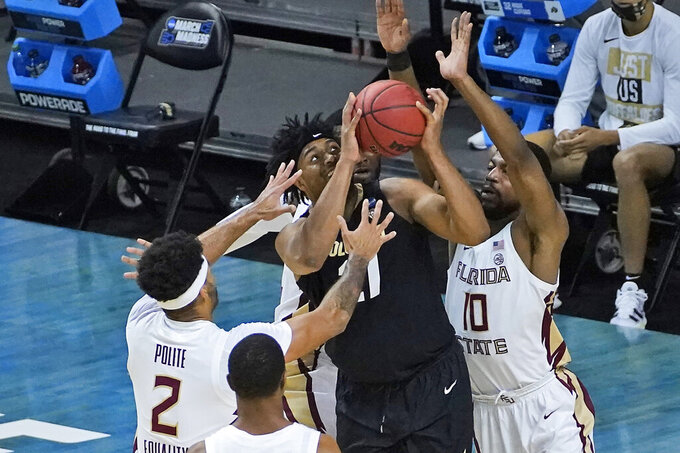 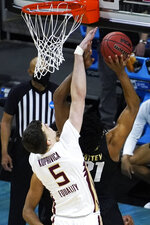 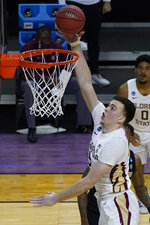 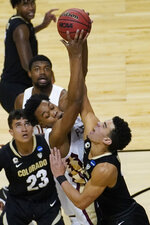 Anthony Polite scored a career-high 22 points and No. 4 seed Florida State pulled away in the second half to beat Colorado 71-53 Monday night and advance to the regional semifinal for the third straight NCAA Tournament.

“These guys are pretty focused,” Hamilton said. "An indication is that nobody was jumping up and down and high-fiving and getting overly excited in the locker room. Everybody was calm, focused — like we’ve been here before. That’s the signs of a team maturing.”

Florida State (18-6) advanced to face East region No. 1 seed Michigan, which knocked out the Seminoles in the 2018 Elite Eight.

Polite had never scored more than 15 points in a game, but the junior made 8 of 12 shots, including 4 of 7 3-pointers.

“It’s probably my best game, definitely, statistics-wise,” Polite said. “I feel like I’m going to keep giving my effort at 100%, keep on coming out with a defensive mentality. Seeing the shots go in is just going to boost my confidence.”

Hamilton — recovering from a ruptured Achilles tendon — again wore a boot as he walked the sideline. His Seminoles shot 53% from the field.

D'Shawn Schwartz scored 13 points for fifth-seeded Colorado (23-9), which shot 36% overall. McKinley Wright IV, Colorado's leading scorer for the season with more than 15 points per contest, finished with 10 on 4-of-12 shooting.

Colorado was coming off a 96-73 victory over Big East Tournament champion Georgetown and was seeking its first Sweet 16 trip since 1969.

“We just lost the season we had, which was such a special season with such special young men in that locker room," Colorado coach Tad Boyle said. "Seven unbelievable seniors. The most connected and one of the closest groups I’ve ever coaches.”

The Buffaloes shot poorly through most of the first half and trailed 20-13 two minutes before the break. Wright's tip-in at the buzzer cut Florida State's lead to 24-20 at the half. It was only his second basket of the game.

Colorado trimmed its deficit to a point on a 3-pointer by Schwartz, but Florida State quickly answered with a thunderous alley-oop dunk by Sardaar Calhoun.

Calhoun broke away for a fast-break dunk, then Scottie Barnes drained a contested runner to push Florida State's lead back to seven.

Minutes later, Balsa Koprivica dunked, was fouled and made the free throw to put Florida State up nine.

Polite hit his fourth 3-pointer of the game with six minutes remaining to put the Seminoles up 55-41. Colorado called a timeout, prompting Florida State's fans to break into an “F-S-U” chant. Colorado's fans booed the officials, who had called a technical on the Buffaloes bench minutes earlier.

Florida State remained in control, stretching its lead to 19 points.

“We had to be locked in, not foul, contest shots, and that took a tremendous effort and a high level of concentration by our team," Hamilton said. "That’s why I was so proud that they continued to keep executing what we had in that game plan, even when they cut the lead right down to one point.”

Boyle called a shooting Monday in Boulder, Colorado, a “senseless act of violence” and offered condolences to families affected after the game. The team spoke postgame in the locker room about the supermarket shooting in the city where the school is located. Ten people were killed, including a police officer, and a suspect was in custody, authorities said.

“It puts basketball in its proper place,” Boyle said. “Win or lose tonight, I felt an emptiness in my stomach. Another senseless act of violence that we’ve experienced as a country many, many times.

“Even if we would have won this game and celebrated going to the Sweet 16, it would have put a damper on it,” he added. “My heart goes out to the families that were affected and those that lost their lives.”

Colorado fell short of breaking the Division I single-season record for free throw percentage. Harvard in 1984 shot 82.18% from the line. Colorado finished this season at 81.87% and would have set the record if not for two misses in the final minute.

Oral Roberts still could top Harvard. ORU is at 82.19% heading into its Sweet 16 matchup with Arkansas.

Hamilton, on handling success: “Now is not the time to take any bows. It’s kind of what we are. If we are satisfied with where we are now, then I guess we can pack our bags and go home."