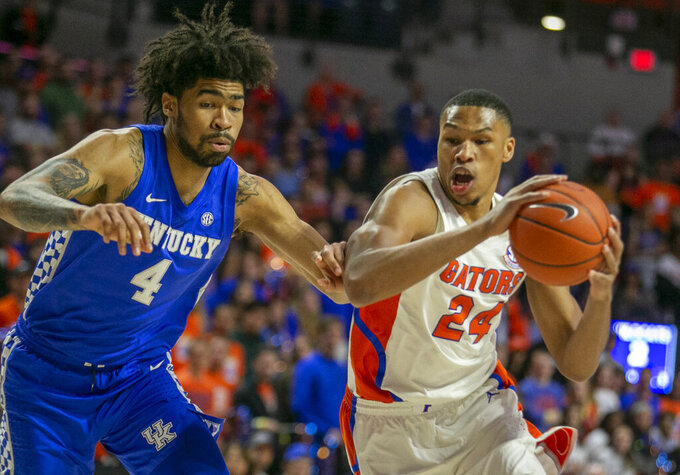 Blackshear injured his wrist during the season finale against Kentucky on Saturday. X-rays were negative, and an MRI showed a sprained ligament.

The Gators (19-12, 11-7 SEC) are the tournament's No. 5 seed and will play either Georgia or Ole Miss on Thursday. Blackshear is not expected to practice all week.

"KJ is as tough as anyone on our team, definitely one of the tougher guys I’ve coached,” Florida coach Mike White said after the game. “Has not missed a practice all year and has battled different things, including illness at times, and won’t take a rep off. So when he walked over to the sideline a couple minutes into the second half and said, ‘I can’t go,’ I knew it must’ve been really hurting him.”

Florida, which is ranked No. 28 in the NCAA Evaluation Tool (NET), appears to be a lock for the NCAA Tournament. Florida could rest Blackshear in hopes of having him as healed as possible for NCAA play.

Blackshear sprained his wrist while fighting for a loose ball in the first half against Kentucky. He returned after halftime with his wrist and hand heavily taped, but ended up on the bench for good after a few minutes of work. He finished with five rebounds, all in the first half, and was scoreless for the first time this season.

The Wildcats took advantage of Blackshear's absence, getting 10 offensive rebounds in the second half that led to 15 second-chance points. Kentucky overcame an 18-point deficit to win 71-70.

Blackshear, a graduate transfer from Virginia Tech, is averaging 12.8 points and 7.5 rebounds in his final season.