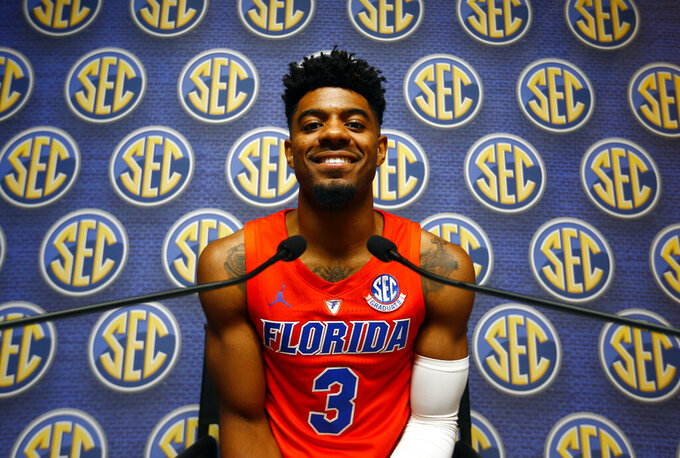 FILE- In this Oct. 17, 2018, file photo, Florida's Jalen Hudson speaks during the Southeastern Conference NCAA college basketball media day in Birmingham, Ala. Hudson has been more of an erratic enigma than a valuable veteran this season. The team’s leading scorer last season is averaging a career-low 6.2 points. (AP Photo/Butch Dill, File) 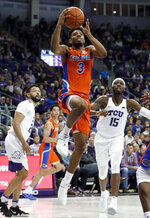 GAINESVILLE, Fla. (AP) — Jalen Hudson unwittingly offered a microcosm of his season in a 13-second span against Mississippi.

The 6-foot-6 Florida guard followed an impressive offensive rebound with a driving, off-balance, left-handed shot that barely reached the front of the rim and an over-the-back foul 90 feet from the basket with the opponent in the double bonus.

He was scintillating and silly, robust and reckless, what his team needs and what it can't have — all a few blinks apart.

It's about what the Gators have come to expect from Hudson.

The fifth-year senior, the team's leading scorer a year ago, has been more of an erratic enigma than a valuable veteran this season. He's averaging a career-low 6.2 points, down nearly 10 a game from his junior year and shooting less than 30 percent from the floor and just under 25 percent from 3-point range.

He looks lost at times, often forcing shots and/or failing to hustle on defense.

The strangest part is no one — not his coaches, his teammates or even Hudson — seems to know exactly what's happened to him.

"The most gut-wrenching thing for me is not being able to figure it out," Gators coach Mike White said. "I feel for him. I really believe he's better than this and he believes in this. ... It's just, it's tough. He's going through something tough. Obviously our team is. I haven't been able to figure it out. That's the hardest thing. But there's time."

Florida (12-8, 4-3 Southeastern Conference) hosts seventh-ranked Kentucky (17-3, 6-1) on Saturday, with Hudson once again trying to snap out of the funk.

"I really couldn't put my finger on it," Hudson said recently, eventually adding that a lack of confidence was partly to blame. "I feel like that was a part of it. Other things, too."

Some wonder whether he ever mentally recovered from entering the NBA draft last March and then failing to land an invite to the combine. He ended up returning to school.

Others pin his struggles on no longer having speedy point guard Chris Chiozza and heady shooting guard Egor Koulechov around. Chiozza's elite quickness opened up the floor, and Koulechov did so many little things that made the game easier for Hudson.

Hudson's output has dipped dramatically without them. He's no longer a starter, having come off the bench in 12 of the last 16 games as White opted to go with highly touted freshmen Keyontae Johnson, Noah Locke and Andrew Nembhard. It's the first time since 1999 that Florida has started three freshmen.

Johnson, Locke and Nembhard have been bright spots in a sub-par season in Gainesville and give the Gators hope for the future, especially considering White has a top-10 recruiting class joining them this summer.

In the meantime, White will keep trying to get Hudson back on track.

"Jalen will have a really, really good practice and you'll be reminded of what he's capable of," White said. "It's in him. Our guys will tell you, he was dominant in practice. He was. He went off at practice. And it's not too late. I mean we can sit here and be depressed about it, 'Woe is me. Didn't go as I planned.' ... We want him to play well.

Hudson looked like he might end his season-long slump with 14 and 11 points, respectively, in lopsided wins against Florida Gulf Coast and Butler in late December. But he's yet to reach double digits in the eight games since.

And three of his four worst performances in terms of plus/minus scoring have come in the last two weeks. He was minus-15 in 10 minutes of playing time during a three-point loss at Mississippi State, minus-9 in 19 minutes of action in a five-point loss at TCU and then minus-12 in 16 minutes in an overtime victory against Ole Miss on Wednesday night.

"I feel like with him it's just, you know, personally just coming out there and just playing his game," Locke said. "I think sometimes he might go out there and think too much, thinking about maybe the past games he's had, thinking what he has to do. Maybe sometimes he might think that he had to do a little too much when he really doesn't have to.

"He can just play within the game and stuff will fall his way. I think it's a lot of mental with him. I feel like it'll get better, but that's what I really think it is."