Florida's Johnson gets ceremonial start on senior day vs UK 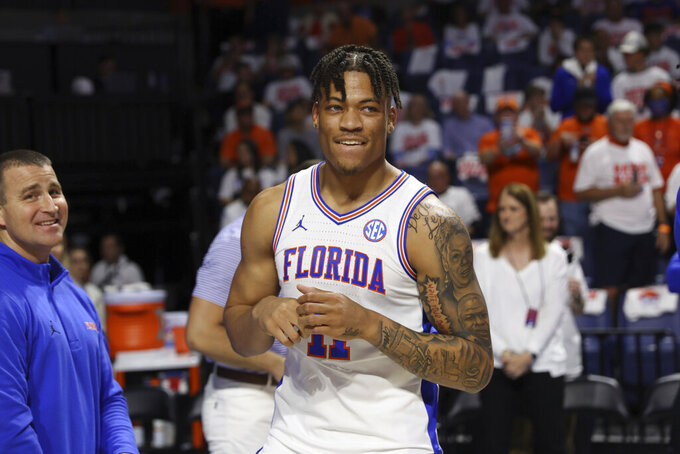 Florida forward Keyontae Johnson (11) smiles after being introduced as a starter before the first half of an NCAA college basketball game against Kentucky, Saturday, March 5, 2022, in Gainesville, Fla. (AP Photo/Matt Stamey)

GAINESVILLE, Fla. (AP) — Florida forward Keyontae Johnson dribbled the ball several times near midcourt, handed it to an official and started hugging everyone around him, even his opponents. He then dropped to the court in a push-up pose and kissed the giant Gators logo — all while being overwhelmed by a standing ovation.

It was an emotional scene that was 15 months in the making.

Johnson, who collapsed during a game in December 2020 and hasn't practiced or played since, got a ceremonial start on senior day against No. 7 Kentucky on Saturday.

“I wanted to stay out there a little bit longer, but had to get off," Johnson said after the Wildcats beat the Gators 71-63.

Johnson was on the floor for the first of two opening tips. He officially played 10 seconds, moments that will last a lifetime.

“This is a day you’ll never forget," he said.

Kentucky coach John Calipari was among the thousands clapping and even hugged Johnson as he checked out of the game. Johnson changed back into street clothes and assumed his usual spot on the bench as “Coach Key.”

“I’m all about fashion so I had to throw my clothes back on,” he quipped.

Calipari offered to let Johnson score the first bucket, but the Gators settled on a brief ball-handling exhibition and a quick exit.

“I got a little emotional because ... his whole life had been to be in this moment and these kind of games and it's taken from him," Calipari said. "But good for Florida for figuring out a way to really honor him and their fans for what they've done.”

Johnson was one of seven Florida seniors honored about 10 minutes before the game. He had his parents, grandparents, young daughter and even the Tallahassee doctor who “saved my life” on hand for the ceremony. In his No. 11 uniform, Johnson was on the floor for layup lines. He forgot his cellphone was tucked into his shorts for the first one, a clear sign of just how long it's been since he's taken part in a game.

“I was trying to get a dunk in before (the trainer) came out,” Johnson said.

The 22-year-old senior from Norfolk, Virginia, is expected to turn pro and try to get medically cleared to work out for NBA teams or attend the NBA Combine before the draft. He also has a $5 million insurance policy that would pay out if he never plays pro ball.

He reiterated Saturday what those close to him have said for months: "I don’t know what the next (step) is.”

Johnson’s insurance policy went into effect in July 2020, five months before he crashed face-first onto the court at Florida State. The Southeastern Conference’s preseason player of the year in 2020 became a trauma patient on Dec. 12 as he crumpled to the court seconds after breaking a team huddle in the fourth game of the COVID-19-delayed season.

Johnson received emergency medical attention in front of teammates, opponents and fans before getting rushed to a Tallahassee hospital. He spent 10 nights in hospitals and returned home in time to celebrate Christmas with his family. He was on hand for Florida’s first practice following a two-week hiatus.

Johnson’s parents said last year their son’s collapse was not related to a previous positive COVID-19 test, citing a consultation team that included experts from four highly respected schools of medicine. The family has not said what doctors believe caused the episode.

Johnson has spent most of the last two seasons cheering on teammates from the bench as he remained enrolled in school and on scholarship. He is scheduled to graduate next month.

The Gators worked much of the week figuring out a way to honor Johnson on senior night, and Florida coach Mike White was close to tears as he expressed his appreciation.

“It’s a unique day. It’s a weird day. It’s a whatever day; you could go so many different ways with it," White said. "It's a special day. It's a great day, but it’s a really, really tough day.