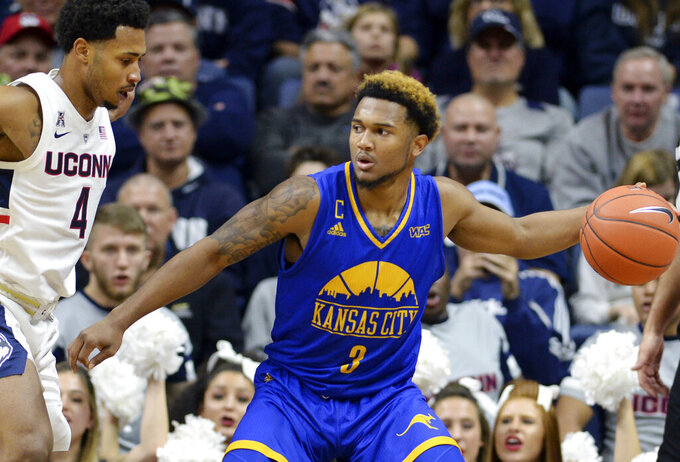 FILE - Kansas City guard Brandon McKissic (3) looks to pass during the second half of an NCAA college basketball game against Connecticut in Storrs, Conn., in this Sunday, Nov. 11, 2018, file photo. Florida coach Mike White took the first step in a significant rebuilding process Friday, April 2, 2021. White got a commitment from Kansas City guard Brandon McKissic. The senior led the Roos with 17.2 points a game this season.(AP Photo/Stephen Dunn, File)

GAINESVILLE, Fla. (AP) — After a week of departures that saw four of his players enter the transfer portal and two more turn pro, Florida coach Mike White took the first steps in replacing them Friday.

McKissic led the Roos with 17.2 points a game this season and was a finalist for the Lefty Driesell National Defensive Player of the Year Award. He will be a graduate transfer in Gainesville during the 2021-22 season.

The duo could give Florida as many as five transfers in White's starting lineup next season, which would be a first for the program but hardly new ground given the changing landscape of college basketball.

Big man Colin Castleton (Michigan), point guard Tyree Appleby (Cleveland State), and forward Anthony Duruji (Louisiana Tech) also are transfers. Castleton put his name in the NBA draft in hopes of getting feedback on ways to improve. He did not hire an agent and is expected to stay in school.

McKissic averaged 3.7 rebounds and 1.2 steals and shot 43% from 3-point range. The 6-foot-3 Missouri native was named the Summit League’s Defensive Player of the Year and earned a spot on the conference's All-Summit League Second Team.

White still has more mining to do of the transfer portal.

Teams across the country are dealing with defections and rebuilds as players take advantage of lenient NCAA transfer rules and a portal that’s ballooned to nearly 1,200 guys seeking new places to play.

Meanwhile, 13 of the 17 high school recruits White signed in the last five years are gone. His entire 2016 and 2017 classes transferred. Only Keyontae Johnson remains from the 2018 class, which lost talented point guard Andrew Nembhard to Gonzaga last year and now is without Locke.