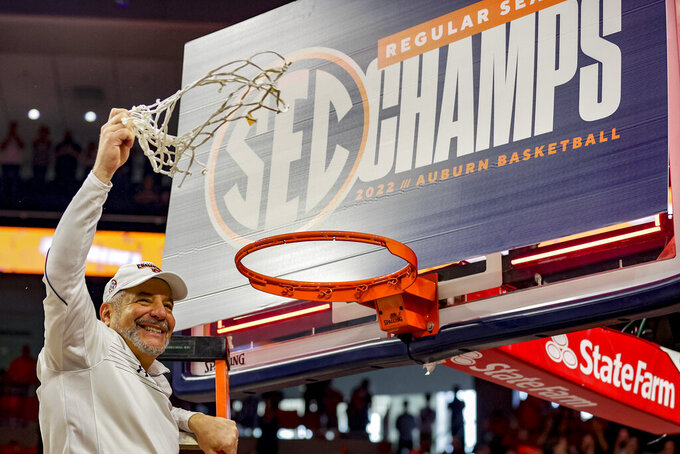 While no Alabama school was able to bring home a football national championship, four teams from the Heart of Dixie are chasing basketball glory.

No. 2 seed Auburn is the lone Alabama school in the field that counts as anything but a huge longshot to win it all heading into the NCAA Tournament. Still, it’s the first time four teams from Alabama have shared the tournament field.

“I’m always pulling for in-state teams. I was pretty excited when I saw them come up on the board because they deserve it,” Auburn point guard Zep Jasper said. “They worked super hard this year. Another team I was looking forward to seeing was UAB.

“Those guys are also a great Alabama team. It’s just exciting to see Alabama teams in it together.”

Alabama stumbled down the stretch with three straight losses but landed an at-large bid as a No. 6 seed. The Crimson Tide face the winner of No. 11 seeds Notre Dame and Rutgers on Friday in San Diego, California.

Conference USA champion UAB is the 12th seed and faces No. 5 Houston on Friday in Pittsburgh.

It all gives a state known mostly for football something to celebrate, a couple of months after the Crimson Tide football team lost to Georgia in the national championship game.

Teams from Alabama have produced some March runs, but it’s been a while since multiple teams have.

Auburn made its first Final Four in 2018-19. Alabama and UAB both advanced through the first weekend in 2004, making the Sports Illustrated cover with a headline “Sweet Alabama.”

That Tide team went to the Elite Eight but Alabama has now made the field in back-to-back seasons for the first time since 2005.

“I think people around here need to be reminded it's been an unbelievable season,” Alabama coach Nate Oats said. “Let's not forget that we're at a place that's changing the culture of men's basketball.”

The Blazers have made the Sweet 16 three times, twice under Gene Bartow. He took UAB to the NCAA Tournament every season from 1981-87.

Andy Kennedy's UAB team set a single-season record with 27 wins and won their first Conference USA Tournament title since 2015 with an 82-73 win over Louisiana Tech.

“The Gene Bartow Standard is this,” Kennedy, who starred for the Blazers under Bartow, said after that game. “It’s when guys have pieces of a net in their hats."

“We were big rivals, recruiting rivals and they were our arch-enemy, not just our rival,” Pearl said. “It was very akin to the Auburn-Alabama rivalry and it was very, very heated at times. So I would venture to say there’s probably not a team in the country that Jacksonville State would rather play than Bruce Pearl and Auburn, I’m just telling you.”

Hoop fans in the state this year have options when choosing who to support in the NCAA Tournament.

Just how good a year remains to be seen.