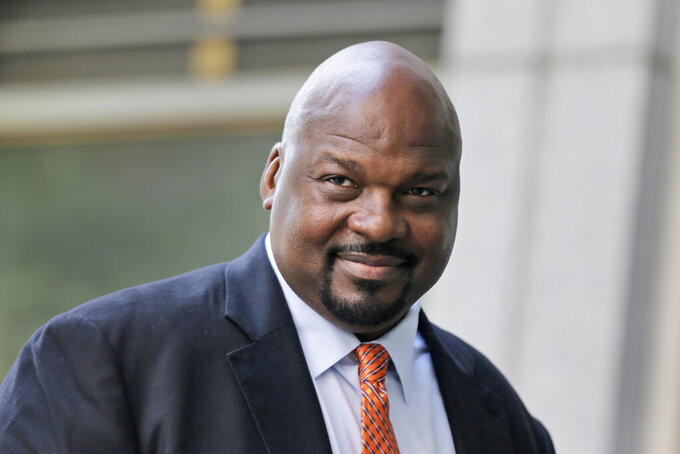 NEW YORK (AP) — Former Auburn University assistant basketball coach and NBA star Chuck Person's lifelong generosity may have driven him to the poorhouse, but it saved him from the jailhouse Wednesday when a judge sentenced him in a bribery scandal that touched some of the biggest college basketball programs.

U.S. District Judge Loretta A. Preska cited Person's "random acts of charity that happened all the time" as she explained why he won't be locked up for taking bribes to steer top college players toward a financial adviser who was cooperating with the government's investigation.

"The worst thing you have to say is that you were charitable to a fault," she told Person, who wiped tears from his face repeatedly. "Keep up the good work."

She ordered him to do 200 hours of community service during the two years the Probation Department will supervise him.

"No purpose would be served by incarceration," Preska said.

Preska said the money Person gave to family, friends, strangers, charities and the schools that propelled him to a 13-year NBA career earned him leniency and a shot at redemption.

She said she "disagreed vehemently" with a prosecutor's claim that Person was motivated by "insatiable greed."

Assistant U.S. Attorney Robert Boone told Preska that Person's crime was worse than others in the bribery scheme because he tried to get players and families to accept bribes even though the government cooperator never suggested it.

The judge read extensively from over 70 letters of support, many citing the generosity which included houses for at least 10 family members, college tuition for two nieces, and computers, school supplies and shoes for high school students.

When he ran out of money, he took out loans to give even more, including $300,000 for a lighted softball complex in Laverne, Alabama, Preska said.

Person, who was in financial trouble at the time, accepted $91,500 in bribes to parlay his relationships with top players to steer them to a financial adviser, federal prosecutors said. The adviser, however, was working as a government cooperator.

Preska noted that after signing his first NBA contract, Person sent most of the money to his family and bought his mother a house. After his playing career ended, he turned down lucrative jobs in the NBA to make less money as a college coach.

Person, who started a personal basketball training business in Atlanta last year, told the judge he had "deep remorse" for taking advantage of his players. He said he still loved Auburn and always will and hoped that "they will one day forgive me and let me come back."

Person's March guilty plea came nearly two decades after he was a regular presence on NBA courts, known as "The Rifleman" for lighting up scoreboards with long-range shooting skills.

After the Indiana Pacers drafted him in 1986, he played for five NBA teams over 13 seasons. In 2010, he earned a championship ring as an assistant coach with the Los Angeles Lakers.

Lawyers wrote that Person's previous financial troubles intensified almost as soon as his NBA career ended, when he was paying $30,000 monthly to his ex-wife while he was earning $18,000 annually in his first non-playing role with the Cleveland Cavaliers.

"Chuck's singular focus on basketball, his failure to plan for his financial future, and his unbounded generosity ultimately had catastrophic consequences," they wrote.

By 2016, when he was an assistant coach at Auburn, where he had set a record as the school's all-time leading scorer in the 1980s, he was deeply in debt with bank loans, the lawyers wrote. One financial institution had obtained a default judgment that garnished 25% of his wages at Auburn, they added.

"Creditors were growing impatient, and Chuck was becoming desperate. Chuck could have turned to his many friends for help, but he was embarrassed and ashamed," they wrote.

Instead, the man who overcame racism and extreme poverty growing up in rural Alabama got swept up in the college basketball scandal when his search for a new loan earned him an introduction to the government cooperator, the lawyers said.

Letters submitted to Preska included one from Charles Sonny Smith, who coached at Auburn for 11 seasons through the 1980s, and one from Sam Perkins, another former NBA player who met Person when both competed to be on the U.S. Olympic team in 1984.