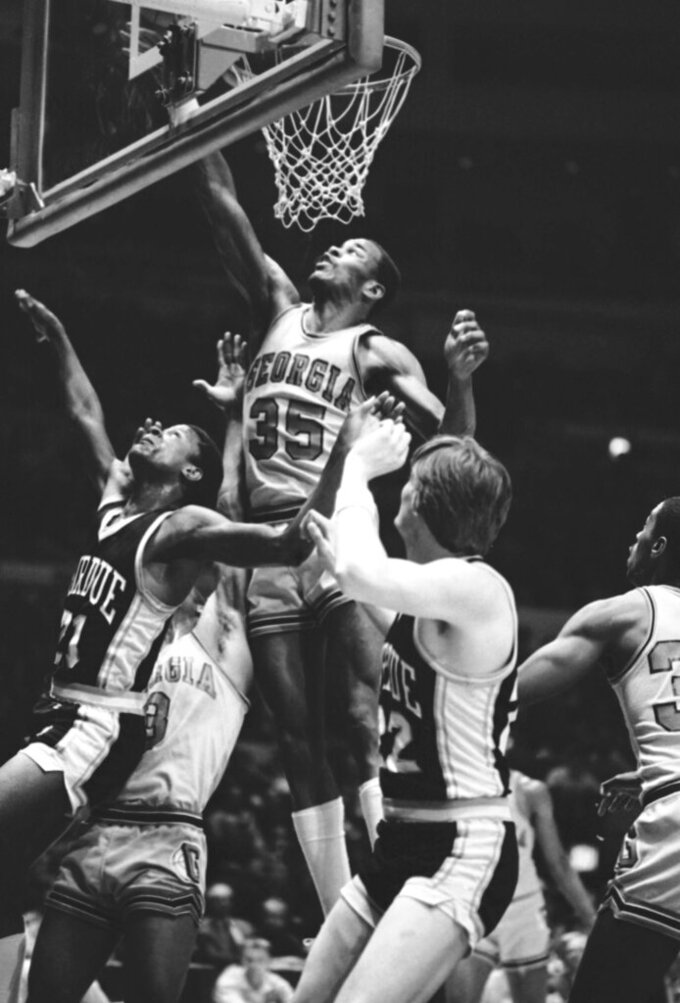 In this March 22, 1982, file photo, Georgia's Terry Fair (35) goes up with the ball with Purdue's Ricky Hall, left, and teammate Dan Palombizio, right, in close range during the first half of a semifinal game in the National Invitation Tournament at New York's Madison Square Garden. Fair, a key player on Georgia only men's Final Four team, has died at the age of 59, the school announced, Friday, Jan. 31, 2020. The university said Fair died Thursday of natural causes in his hometown of Macon, Ga. (AP Photo/Richard Drew, File)

ATHENS, Ga. (AP) — Terry Fair, a key player on Georgia only men's Final Four team, has died at the age of 59, the school announced.

Fair was a four-year starter for the Bulldogs, capping his college career by leading Georgia to an improbable Final Four appearance in the program’s inaugural NCAA Tournament appearance in 1983. It remains the school's greatest season.

Fair, a 6-foot-7 forward, was picked by the Indiana Pacers in the fourth round of the 1983 NBA draft. He went on to play professionally in Israel for a decade and was inducted into the Georgia Sports Hall of Fame in 2013.

“Terry was a player who never thought about ‘me.’ He was always thinking about the team,” said Hugh Durham, who was Fair's coach at Georgia. “He played so hard defensively and would do whatever you asked him to do for the team. Those are the things that I remember most about him as a player.”

Fair also starred on one of the greatest teams in Georgia high school history, the 1979 Southwest Macon Patriots. He averaged 21.1 points and 15.2 rebounds for a squad that captured state and national championships.

“He was a member of an iconic squad that our community will cherish forever,” said Barney Hester, athletic director for the Bibb County School District. “We are saddened by the sudden loss, but celebrate the incredible life he lived.”

Fair joined the Bulldogs as part of a heralded recruiting class that also included Dominique Wilkins.

Wilkins left for the NBA after his junior season, but the Bulldogs won the 1983 SEC Tournament to capture their first NCAA bid. In the East Regional semifinal against third-ranked St. John's, Fair scored a career-high 27 points to go along with nine rebounds, five steals, three assists and three blocks.

The Bulldogs lost to N.C. State 67-60 at the Final Four and became a mere afterthought when the Wolfpack memorably defeated heavily favored Houston on a last-second basket in the championship game.