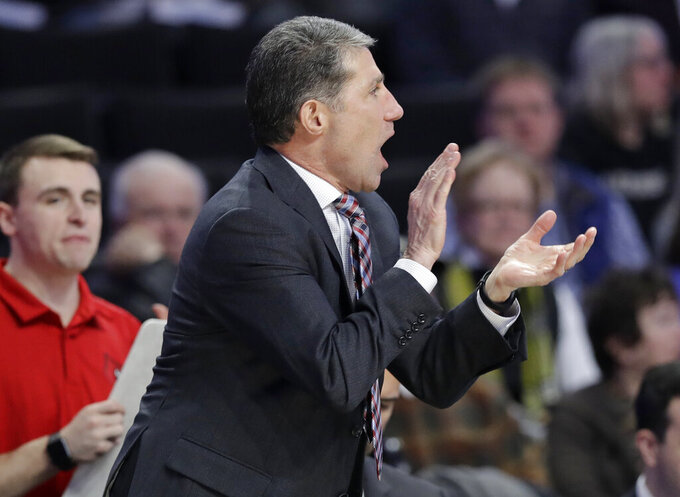 FILE - In this Jan. 30, 2019, file photo, Louisville assistant coach Dino Gaudio cheers on the team against Wake Forest during the second half of an NCAA college basketball game in Winston-Salem, N.C. Federal authorities have charged Gaudio with attempting to extort the university after his dismissal from the team. Gaudio threatened to go to the media with alleged NCAA violations by the team, according to a charging document filed in federal court. (AP Photo/Chuck Burton, File)

LOUISVILLE, Ky. (AP) — Federal authorities have charged a former University of Louisville assistant basketball coach with attempting to extort the university after his dismissal from the team.

Dino Gaudio threatened to go to the media with alleged NCAA violations by the team, according to a charging document filed in federal court.

During a March 17 meeting with team personnel, Gaudio said he would expose alleged violations by the team “in its production of recruiting videos for prospective student-athletes and in the use of its graduate assistants in practices,” according to the document filed in Louisville on Tuesday.

Gaudio had been told his contract would not be renewed and he threatened to go public with the allegations “unless he was paid a significant sum of money,” the document said. Authorities said Gaudio demanded 17 months' salary or a lump sum payment.

Gaudio and another assistant left the team in March after a season in which the team did not qualify for the NCAA Tournament.

“The university and I were the victims of coach Gaudio’s conduct and I will continue to fully cooperate with authorities in their investigations,” Louisville head coach Chris Mack said in a statement Tuesday. “We take seriously any allegation of NCAA violations within our basketball program.”

The university said it could not comment “due to the ongoing federal investigation and the NCAA process.”

Gaudio is charged with interstate communication with intent to extort. It was not immediately clear whether he had an attorney who could comment on his behalf.

Gaudio had been the head coach at Wake Forest University from 2007-10. He then spent eight years as an ESPN analyst before joining Louisville in 2018. Gaudio also previously led Army and Loyola-Maryland and worked with Mack at Wake Forest.