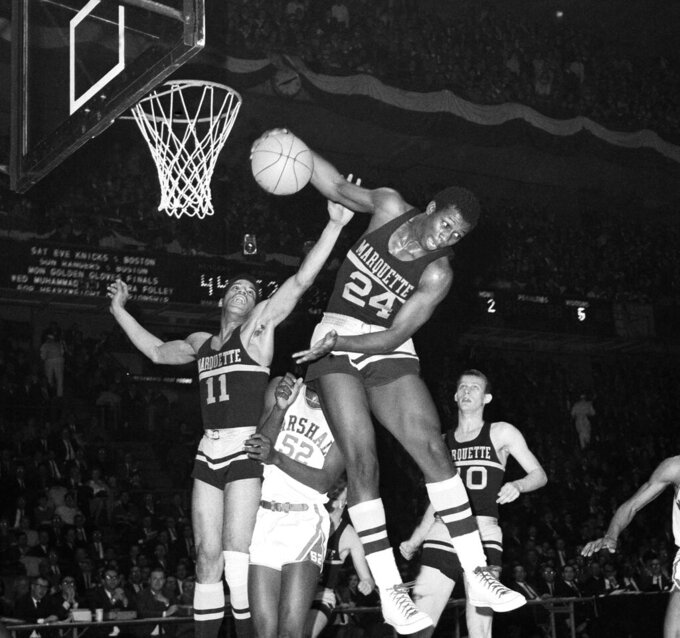 FILE - Teammates George Thompson (24) and Pat Smith (11) of Marquette leap for rebound in the first half of a college basketball against Marshall University at Madison Square Garden in New York, March 16, 1967. Thompson, who played for Marquette from 1967-69 and remains one of the program’s all-time leading scorers, has died. He was 74. Marquette announced Thompson died Wednesday, June 8, 2022 at his Milwaukee home due to complications from diabetes. (AP Photo)

MILWAUKEE (AP) — George Thompson, who played for Marquette from 1967-69 and remains one of the program’s all-time leading scorers, has died. He was 74.

Marquette announced Thompson died on Wednesday at his Milwaukee home due to complications from diabetes.

He averaged 20.2 points during his Marquette career under coach Al McGuire. The team posted a combined record of 68-20 during Thompson's three seasons.

“George is really the one who got everything started at Marquette,” current coach Shaka Smart said in a statement. “There aren’t words that can express how important he was to this program. The reverence with which former players and fans alike speak of George is second to none. We’ve lost a true legend.”

Born in New York, Thompson attended Erasmus Hall High School. After college, he was drafted in the fifth round by the Boston Celtics but played in the ABA with the Pittsburgh Pipers/Condors (1969-72) and Memphis Tams (1972-74). He spent the 1974-75 season with the Milwaukee Bucks.

He stayed in the Milwaukee area after his playing career and was a longtime analyst on Marquette radio broadcasts. Thompson was inducted into the Marquette Hall of Fame, Wisconsin Athletic Hall of Fame and New York City Basketball Hall of Fame.

“George’s name is synonymous with Marquette basketball,” Marquette athletic director Bill Scholl said in a statement. “He was part of the foundation our program was built on and his career speaks for itself. He had a lasting impact on our university, and we mourn the loss with our entire Marquette family.”