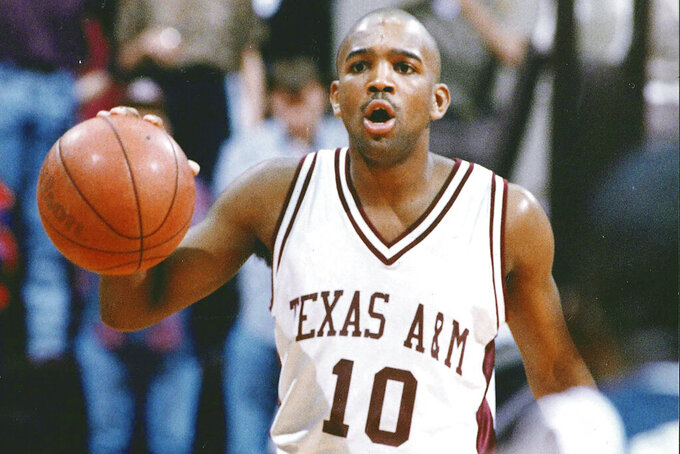 This undated photo provided by Texas A&M University shows Texas A&M basketball player David Edwards. Former Texas A&M basketball player David Edwards, whose single-season school record for assists has stood for more than 25 years, died in his home state of New York. He was 48. The school said in a news release Edwards died Monday, March 23, 2020. Former teammate Charles Henderson posted on social media that Edwards died of complications from the new coronavirus. The Associated Press couldn’t confirm Henderson’s account. The new coronavirus causes mild or moderate symptoms for most people, but for some, especially older adults and people with existing health problems, it can cause more severe illness or death. (Texas A&M Unversity via AP)

COLLEGE STATION, Texas (AP) — Former Texas A&M basketball player David Edwards, whose single-season school record for assists has stood for more than 25 years, has died in his home state of New York. He was 48.

Edwards, who was from New York City, played three seasons for the Aggies from 1991-94 after transferring from Georgetown. He is second to Alex Caruso on Texas A&M's career list in assists (602) and steals (228). Edwards averaged 13.5 points per game.

Texas A&M reached the NIT when Edwards was a senior, losing in the first round to New Orleans. Edwards finished third nationally in assists in 1993-94 with a school-record 265.

Edwards played 31 games at Georgetown in 1989-90, averaging 5.4 points and 4.8 assists in 20 minutes per game before transferring and sitting out a year.

Former Texas A&M athletic trainer Mike Ricke recalled a game when Edwards wouldn't come out after taking an elbow to the head and suffering a cut that required treatment.

“Dave was such a competitor,” Ricke said. “He was such an awesome passer. If you were on the floor you better be ready because he would fire a pass to you and it had some mustard on it.”