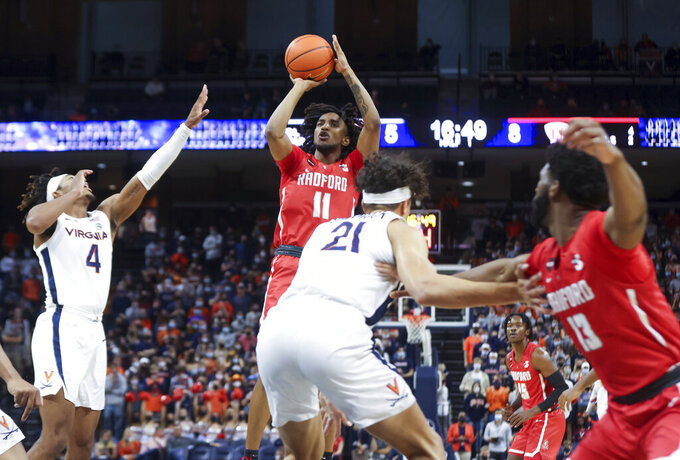 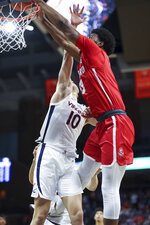 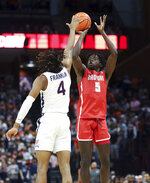 The Cavaliers (1-1), who were beaten 66-58 by Navy on Tuesday night, used a 24-5 first-half burst to take a 32-15 lead. They held the Highlanders without a point for five minutes and never let their lead shrink below 15 after that.

Franklin, a transfer from Indiana, went 5 for 8 from 3-point range, endearing himself to Virginia fans after making 1 of 7 3s in the opener. Coach Tony Bennett said Franklin was ill during the Navy game.

“I felt like I took the Navy loss really hard just for me because I felt like I didn’t do my job to the best of my ability. And when I don’t do that, I feel like I’m letting people down,” Franklin said, adding that he was tense in his debut.

“Tonight I was a lot more relaxed, played free,” he said.

Added Virginia reserve Carson McCorkle: “I expected that from him to come back from that. I hadn’t seen him shoot it that bad since I’ve known him, since he’s been here. So every shot he took tonight looked good and looked like it was going in. And that’s the Armaan we know, so I didn’t expect anything less."

Bryan Hart led Radford (1-1) with 12 points, but the Highlanders shot 38% and committed 15 turnovers that Virginia turned into 19 points. They also were outscored 24-6 from the free-throw line and had four players with four fouls.

“We knew who he was,” said first-year coach Darrius Nichols, who came from Florida and said the Gators recruited Franklin. “We knew what he could do.”

It was the first meeting between the in-state schools since the 2010 season.

Radford: The Highlanders hit their first two 3-point tries, a hot start that resembled Navy's. But Virginia didn't wait until the second half to tighten up this time and had lots of hands in passing lanes, disrupting everything Radford tried to get going.

Virginia: The Cavaliers led 41-21 at the half and might have won by a larger margin had they not gotten away from their methodical offensive approach and started running with the Highlanders early in the second half.

Among the things to work on? Turnovers against the press and rebounding.

“You know, we got some decent looks, some 3s early and missed a couple. But no, the second half was not as sharp as the first half, but there were still some things to build on in it," Bennett said.

Virginia: At No. 15 Houston on Tuesday night. The Cougars made the Final Four last season, and Bennett glanced at a television when he was asked about the matchup. He could only laugh at the halftime score of Houston's game.

“Forty-four to 15, I see. They’re up against Rice. Timing’s perfect,” Bennett said.