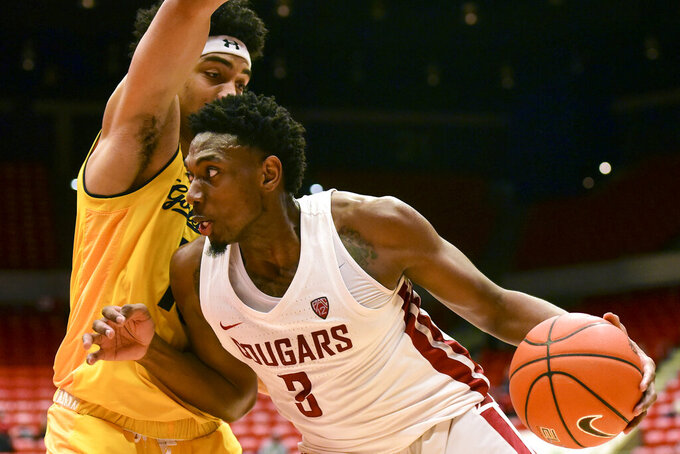 PULLMAN, Wash. (AP) — Robert Franks, after missing four games with a hip contusion, returned to the court in a big way Thursday.

The 6-foot-9 senior scored 24 points and grabbed eight rebounds as Washington State beat California 82-59 on Thursday in a clash of the Pacific 12 Conference's winless teams.

Franks scored five quick points to open the second half with a jump shot and a 3-pointer wrapped around a lost ball turnover that put WSU ahead by double digits barely a minute into the final period. The Cougars lead stretched to as many as 29 points from there.

"It's nice having Robo back and I told this team before the game, we have what I would call a lot of growth potential in us," said WSU coach Ernie Kent.

Coach Kent said WSU, thanks to a series of injuries, is still finding its identity and the Cougars have a higher ceiling for how good this team can become.

The Cougars had five players score in double figures. Freshman CJ Elleby who is the second leading scorer for WSU finished with 11 after picking up his fourth foul with 16:02 left in the second half. Viont'e Daniels and Marvin Cannon also finished with 11 points while Jeff Pollard had 10.

The Bears only managed to shoot 39 percent from the field while allowing 14 turnovers.

The Cougars finished the first half strong, going on a 14-4 run in the last 5:30. Ahmed Ali sparked the Cougars with a 3 and Franks finished a 3-point play on the next possession. WSU capped the run with layups from Franks and Pollard to build a 42-33 halftime lead.

In the second half, Cannon followed a Franks missed 3 with a vicious one-handed dunk bringing the home crowd to their feet.

"We had to get the rhythm back and that's what we did in the second half. That's why you saw us stay with one group for a long period of time to get them comfortable," Kent said.

WSU shot 54 percent from the field and made 45 percent of their 3-pointers in a rare efficient game this season.

Elleby beat the shot clock for a 3 before the buzzer sounded as WSU closed the game with a final 10-0 run for a comfortable 26-point lead.

Washington State: The Cougars still face an uphill battle in the Pac-12. WSU is expected to finish at the bottom of the standings. WSU stays home to play a struggling Stanford team that is led by KZ Okpala who averages 18 points per game.

California: The Bears season continues to sink after a loss to a terrible WSU team. Cal is now on a five game Pac-12 losing streak and is in danger to finish the season last in the conference.

The Cougars are now 8-0 when they play at home in Beasley Coliseum this season.

"We can get better here at home. The road, where we have not had a lot of success, has still forced us to grow because some of those guys grew up on the road even though we weren't winning games. They were growing individually," said coach Kent.