Frazier, No. 18 Illinois surge in 2nd half past Indiana 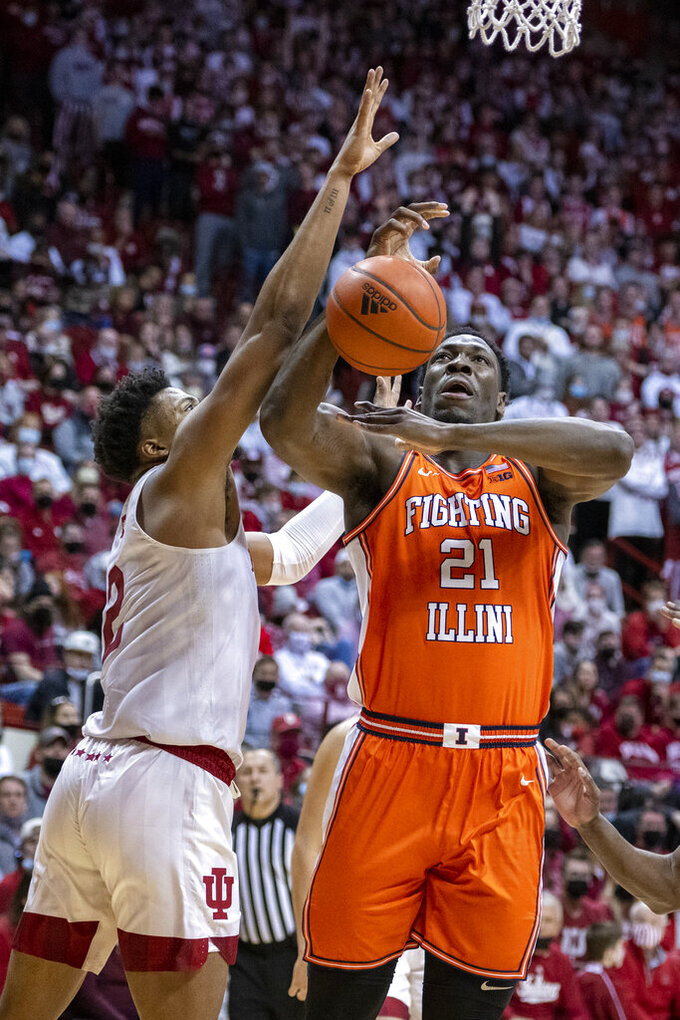 Indiana center Michael Durr (2) knocks the ball out of the hands of Illinois center Kofi Cockburn (21) as he attempts to shoot during the first half of an NCAA college basketball game, Saturday, Feb. 5, 2022, in Bloomington, Ind. (AP Photo/Doug McSchooler) 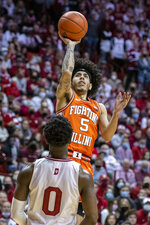 BLOOMINGTON, Ind. (AP) — No. 18 Illinois needed someone other than Kofi Cockburn to produce Saturday.

Trent Frazier delivered with a nearly flawless second half.

The senior guard made all three of his shots inside the arc, went 2 of 3 from 3-point range and hit both free throws to finish with 23 points while leading the Fighting Illini to a 74-57 victory at Indiana.

“That's why I came to this school, to play in these types of environments with the emotion and the energy," Frazier said after Illinois produced its largest victory margin in the 50-year history of Indiana's Assembly Hall. “It's always fun to play these types of games, especially a victory."

Frazier also returned this season to win a Big Ten championship and after winning their fourth straight overall — and their second straight on the Hoosiers home court — the Fighting Illini (17-5, 10-2) still have the league lead.

Cockburn played a solid game. He finished with 17 points and eight rebounds, falling two rebounds short of his 41st career double-double to remain one short Skip Thoren's career record which has stood since 1965.

Indiana (16-6, 7-5) was led by Race Thompson with 13 points and six rebounds. Xavier Johnson had 12 points, five rebounds and five assists on a day preseason All-American Trayce Jackson-Davis missed the final 15 1/2 minutes of the first half because of foul trouble.

Grandison started a decisive 16-3 run with back-to-back 3s, the second giving Illinois a 48-45 lead — its first since less than three minutes into the game. Cockburn and Frazier combined to score the remaining points in the spurt as Frazier capped it with a 3 to put Illinois ahead 58-49 with 7:45 to play.

Illinois spent the rest of the game pulling away and Indiana lost its second home game of the season without making another serious challenge.

“How spectacular was he?" coach Brad Underwood said, referring to Frazier. “We made six 3s, Jake’s two early ones were huge. Trent got downhill, got a few layups and broke the game open with a few stops.”

Illinois: Underwood's team played its way back into the conference lead behind an incredibly stout defense and Cockburn's strong inside play. The defense continued playing well Saturday and Frazier's strong finish helped offset a mediocre day for Cockburn. The combination could lead Illinois to a conference crown.

Indiana: The Hoosiers have rebuilt their defense-first philosophy under new coach Mike Woodson — and it's worked wonders. But on Saturday, they wore down against a bigger, stronger opponent. Indiana has been on the cusp of cracking the Top 25 over the past few few weeks and now the wait will take a little longer.

Illinois was poised to move into the Top 15 after beating Wisconsin earlier this week and it only solidified it's case with Saturday's win. The only real question is how high the Illini will climb.

Illinois: Cockburn finished 6 of 13 from the field and Alfonso Plummer finished with 14 points. ... Da'Monte Williams had seven rebounds and Frazier and Grandison each had four assists. ... The Illini have won eight of their last nine road games in conference play. .. Illinois shot 53.8% from the field and were 6 of 13 from 3-point range in the second half against the Big Ten's top defense. ... Underwood won his 50th career Big Ten game.

Indiana: Jackson-Davis finished with six points, six rebounds and three turnovers in 23 minutes. ... The Hoosiers shot 29.6% from the field in the field in the second half, going 8 of 29. ... Jeremy Gray filled in as the public address announcer after this week’s surprise announcement that Chuck Crabb was retiring immediately after 45 years on the microphone.

By Hank Kurz Jr. 29 minutes ago
an hour ago
By Dan Gelston 2 hrs ago
By Jacob Benge 2 hrs ago
2 hrs ago