Fresh off a senior major, Stricker returns to Bethpage 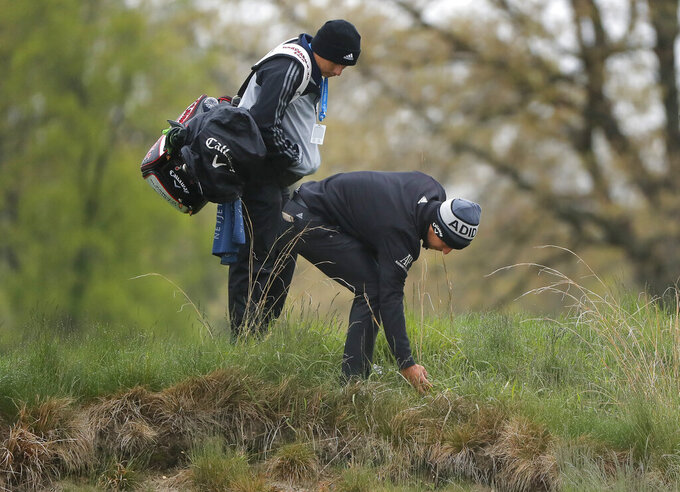 Xander Schauffele, picks his ball out of the rough on the 4th hole during a practice round for the PGA Championship golf tournament, Monday, May 13, 2019, at Bethpage Black in Farmingdale, N.Y. (AP Photo/Julie Jacobson)

FARMINGDALE, N.Y. (AP) — The modest Midwestern lifestyle of Steve Stricker has given way to moments of celebrity over the last month.

Stricker spoke Wednesday about watching the final round of the Masters from his winter home in Naples, Florida, with his wife and two daughters, when he casually mentioned that Virginia basketball coach Tony Bennett was with them. This was six days after Bennett celebrated an NCAA title. Bennett played at Wisconsin-Green Bay.

Stricker won his first major — the PGA Tour Champions variety — at the Regions Tradition in Alabama, which ended on Monday because of rain delays. And then it was off to the airport to get to New York for the PGA Championship.

"I felt like Nick Saban leaving Birmingham," Stricker said. "If you've ever seen Nick Saban coming into Birmingham, it's four squad cars, multiple police escort, and I was able to get one of those to the airport. I felt pretty special leaving."

And now he's among two players from the 50-and-over circuit who are Bethpage Black for the PGA Championship, the other being John Daly.

Stricker is more closely linked this week to Phil Mickelson. They are the only two players at the PGA Championship who have played all four rounds of all four tournaments at Bethpage — the U.S. Open in 2002 and 2009, and The Barclays in 2012 and 2016.

Stricker is a late arrival, but he knows what he's about to face.

His first trip was a family affair because his brother-in-law, Mario Tiziani, also played in the 2002 U.S. Open.

Xander Schauffele's rapid rise to No. 9 in the world ranking — this is just his third season on the PGA Tour — displays his talent and resolve on a golf course.

It also shows he is a quick learner.

Asked what he is doing better now than in his rookie season in 2017, Schauffele didn't hesitate.

"Panic. I panic less," he said Wednesday on the last day of practice for the PGA Championship. "I don't feel as overwhelmed, I'd say. I think I know what I'm doing, and we'll go with that. I don't really listen to a whole lot of noise, and I kind of keep my head down more.

Then again, why should he feel any anxiety or insecurity? Schauffele already has four tour wins, including a World Golf Championship victory this season at the HSBC Champions in Shanghai, and a 62 in the final round at Kapalua to win the Sentry Tournament of Champions.

He tied for second at the Masters, one shot behind Tiger Woods.

In 2017, he won the Tour Championship after his breakthrough victory at the Greenbrier Classic.

Schauffele, 25, concedes he had to learn how to stay focused regardless of what happened around him.

Justin Rose wasn't aware of a slice of PGA Championship history that hits home. It has been 100 years since James Barnes won this major, and no one from England has had his name on the Wanamaker Trophy since then.

Then again, the deck has been heavily stacked in favor of Americans.

The PGA Championship has more Americans than any of the other three majors at 56 percent, which includes 18 of the 20 club professionals. Rose is among 12 players from England in the field, down two from a year ago.

Nick Faldo was runner-up in consecutive years in the early 1990s. Lee Westwood and Luke Donald, who reached No. 1 in the world, never seriously contended in the PGA Championship. Neither has Rose.

"There's Tommy Fleetwood, Paul Casey, a bunch of young guys coming through, as well," Rose said. "England is well represented in the top 30, 35 of the world rankings. There's plenty of talent and firepower. You just need a bit of lady luck and the starts to align. For me, I'd love to be the guy to get over the hump."

What happens at the PGA Championship could shape who goes to Pebble Beach.

With the PGA moving to May, it now is the final event for players to be among the top 60 in the world ranking and be exempt into the U.S. Open. Sungjae Im of South Korea is holding down the 60th spot over Emiliano Grillo, Abraham Ancer, Aaron Wise and Scott Piercy.

It also is the cutoff for the top 50 to be exempt into the British Open. Sitting at No. 50 is Jim Furyk, just ahead of Charles Howell III.