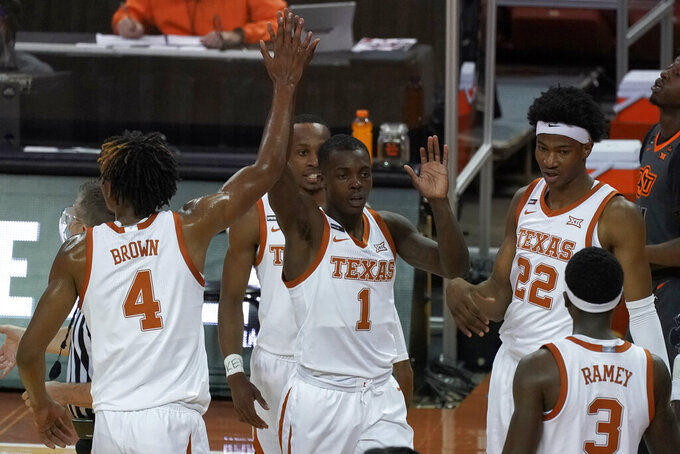 Texas' Andrew Jones (1) is congratulated by teammates, including Greg Brown (4), after making a three-point basket against Oklahoma State during the first half of an NCAA college basketball game in Austin, Texas, Sunday, Dec. 20, 2020. (AP Photo/Chuck Burton) 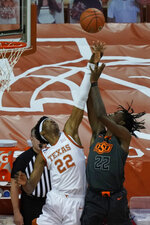 AUSTIN, Texas (AP) — For five games, Greg Brown showed glimpses of tremendous talent. In the next three, the Texas freshman dispatched it more properly and consistently.

The 6-foot-9 Brown made four free throws during the final 37 seconds as Texas (7-1) survived a late Oklahoma State (6-2, 0-2) rally that included two 3-point baskets by Bryce Williams in the final 21 seconds. Brown made a pair of 3-pointers during a 17-0 Texas run in the second half. He also had three blocks in the game.

Brown, one of the top 10 ranked recruits in the country, scored 18 and 17 in his previous two games after not having more than 11 in his first five. Brown now is in less of a hurry when he has the ball.

Brown didn't slow down on the boards, grabbing five offensive rebounds and helping Texas to an 18-5 edge in second chance points.

Andrew Jones matched his career best with 22 points, and Matt Coleman had 15 for Texas.

Oklahoma State freshman Cade Cunningham, a 6-foot-8 point guard, scored 25 points, including 13 of 14 for the Cowboys as they tried to erase what was once a 13-point deficit in the second half.

“There's a reason everybody has got him as the No. 1 (NBA) pick,” Texas coach Shaka Smart said.

Even so, Cunningham said, “I wish I could get going earlier.”

Cunningham received a technical foul with 5:02 remaining after making a layup. He thought he was fouled while shooting. Coleman converted both free throws for Texas.

“I yelled ‘and one,’ ” Cunningham said. “Maybe I shouldn't have yelled that loud. That's a costly mistake. ”

Texas trailed 34-29 after a dismal first half of half-court offense against Oklahoma State’s zone. The Longhorns shot 32.4% and missed 13 of 16 3-point attempts. They committed nine turnovers.

Their defense wasn’t particularly effective, either. Oklahoma State hit 48.3% in the half and outscored Texas 26-14 in the paint.

Texas, 4 for 18 on 3-pointers five minutes into the second half, suddenly heated up, making three in a row, one by Coleman and the two by Brown. Then Brown added a pair of free throws, Donovan Williams scored in the lane, Jones hit a 3-pointer, and Texas had the 17-0 streak and a 13-point lead with less than 11 minutes remaining.

Though the Longhorns shot better in the second half — 45% — Smart said the game turned on their defensive effort.

“Defense is one thing that travels, and one thing we can control," Smart said. “You can't control making shots all the time. But we can definitely control our effort on the defensive end.”

Oklahoma State: The Cowboys won their first six games, including one at Marquette. Then they slipped in the Big 12 opener, losing 77-76 to TCU in Stillwater on Wednesday despite leading by eight with 2:21 remaining. After a pretty strong first 25 minutes, they were temporarily steamrolled by Texas before making a comeback.

Texas: The Longhorns often struggled to generate effective half-court offense during Smart’s first five seasons as coach. This season, his sixth, has been better, significantly at times, the offense improved with veteran guards in charge. After that rough first half against Oklahoma State, the Longhorns were much better in the second.

Texas did nothing to hurt itself with victories against Sam Houston State and Oklahoma State in a span of five days.

Brown seemed extra motivated to play against Cunningham, whom he called a friend.

“Of course there was trash talk,” Brown said. “I love Cade. That's my dog. Two great players going at it. We're brothers off the court but enemies on the court.”

Oklahoma State: The Cowboys are at No. 14 Texas Tech on Jan. 2, their second straight game against a ranked team.