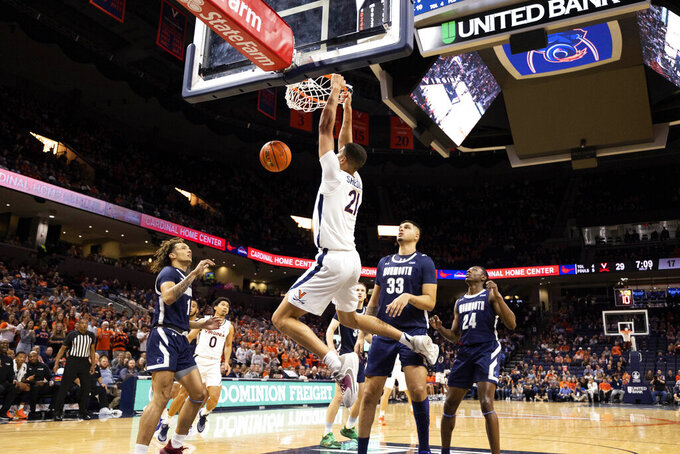 Virginia's Kadin Shedrick (21) dunks the ball against Monmouth during the first half of an NCAA college basketball game in Charlottesville, Va., Friday, Nov. 11, 2022. (AP Photo/Mike Kropf)

Freshman Isaac McKneely scored 15 points, classmate Ryan Dunn had 13 and the No. 18 Cavaliers closed the first half on a 32-8 run and beat Monmouth 89-42 on Friday night.

“We come into every game looking to play, coming in ready,” McKneely said. “We don’t work hard for no reason. We’re working in practice every single day to get minutes. I think me and him showed that we’re capable of playing at this level.”

The Cavaliers (2-0) added a 21-2 burst in the second half, never allowing the Hawks to even entertain the idea of making a game of it after trailing 42-21 at halftime.

Myles Foster led the Hawks (0-2) with 10 points, but they all came in the first 11 minutes before he was saddled with foul trouble. Myles Ruth added eight points.

Virginia trailed 13-10 before McKneely tied it at the 13-minute mark with his first of his four 3-pointers. They made four more before halftime and led 42-21 at the break.

Dunn was more nervous to conduct postgame interviews than to play.

“For me, the first 2 minutes of the game I was kind of nervous because it was my first time ever in collegiate basketball,” he said. “But again, it’s a sport I play and I love. So once I got the flow of it, it was kind of just playing to play. If I messed up. I messed up.”

The Hawks helped make it look easy. They made their last field goal of the half on a left-handed hook by Foster with 10:28 to play and were outscored 23-4 the rest of the way.

“I tried to explain to my kids that they're a team and they're not going to do unteamlike things,” 12th year Hawks coach King Rice said. “They’re going to do what they’re supposed to. Every time. And if you try to shortcut it, it can get ugly.”

The Cavaliers got 3-pointers from seven different players — they were 13 for 25 from beyond the arc — and scoring from 10 players. When Reece Beekman made the Cavaliers' 11th 3-pointer with 9:48 to play, the Hawks had just 12 field goals.

The Hawks, first-year members of the Colonial Athletic Association, shot 39% overall, made just three of 11 from 3-point range and were outscored 48-42 by Virginia reserves.

Monmouth: The Hawks lost 84% of their scoring when seven seniors were graduated off last year's team, and struggled mightily on the offensive end, especially with Foster in foul trouble. He had three before halftime and drew a fourth early in the second half.

Virginia: The Cavaliers looked to be in midseason form, especially on defense, forcing 20 turnovers that they turned into 35 points and two 30-second shot-clock violations.

Monmouth is back on the road and plays at No. 23 Illinois on Monday night.