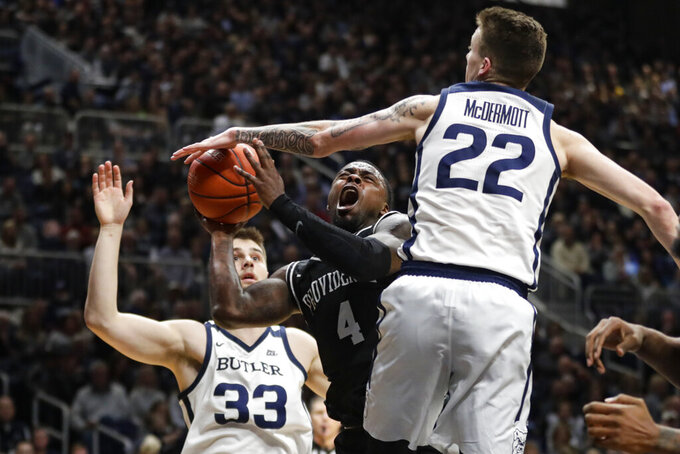 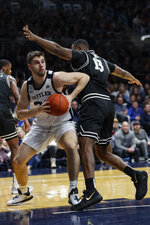 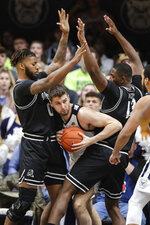 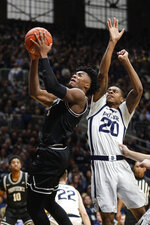 He benched his best player so he could start his two biggest players side by side against No. 16 Butler.

Then the struggling Friars saw the strategy pay off. Luwane Pipkins hit six straight free throws in the final minute, finished with 22 points and helped Providence hold on 65-61 for its first road victory over a ranked team in nearly three years.

Providence (12-10, 5-4 Big East) certainly could have made that case after losing three straight and four of their previous five — two of those by four points.

But the lineup change of starting top scorer and rebounder Alpha Diallo on the bench might wind up helping the Friars turn the corner.

It was their first victory over an Top 25 team since March 19, 2018. And now, with their best defensive performance of the season on tape, the Friars just got a boost of confidence, too.

They followed the script masterfully.

With 6-foot-10 Nate Watson and 6-9 Kalif Young jamming up the middle, the Friars used their smaller, quicker guards to prevent Butler's usually reliable perimeter shooters from getting open looks.

Kamar Baldwin scored 14 points to lead the Bulldogs (17-5, 5-4), who have lost two of their last three home games. Justin Tucker added 12 points and eight rebounds in a game Butler spent most of the time playing catch-up.

Providence answered with six straight points and never trailed again. David Duke's putback with 2:22 left gave Providence a 58-54 cushion and Pipkins closed it out at the free-throw line, where he was 10 for 10.

“They switched and got out, did a good job of getting guys off the (3-point) line," Butler coach LaVall Jordan said. “They've got a versatile lineup so they can switch out and take away the 3s."

Providence: With a bigger, more physical lineup, the Friars managed to negate one of Butler's biggest advantages — rebounding. Their pressure also kept the Bulldogs' offense out of sync. Could it be a long-term solution to Cooley's concerns? Stay tuned.

Butler: Point guard Aaron Thompson has missed three straight games with an injured wrist, and the Bulldogs haven't been the same without him. Thompson's absence has forced Tucker and Baldwin to get more involved with the ball-handling and opposing coaches have noticed the difference.

Butler: Bryce Nze scored 12 points and Sean McDermott had 10 points and seven rebounds. ... The Bulldogs shot 40% from the field. ... Butler is 4-2 in games decided by five or fewer points. ... Baldwin finished the game with 1,804 points, moving past Lynn Michem (1,798) and into seventh on the school's career scoring list. He also had two steals, moving into fourth all-time with 184 — one ahead of A.J. Graves.

Providence: “Tucker and McDermott are great catch-and-shoot guys, so we wanted them to be more ball handlers than shooters. And again Thompson wasn't on the court to be a great facilitor. Not having him is so critical -- so, so critical."

Butler: “You've got to get stops to win," Jordan said. “We couldn't get enough stops down the stretch.”

Providence: Plays its only home game in this four-game stretch Wednesday against Creighton.

Butler: Hopes to even the season series when No. 8 Villanova visits Hinkle Fieldhouse on Wednesday.